The EU has set out a package of measures to try to ease the migrant boat crisis in the Mediterranean. 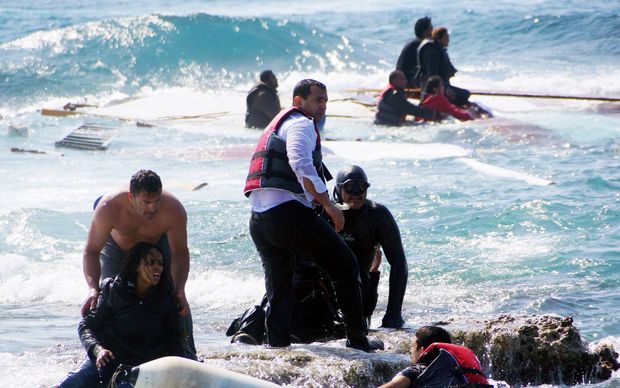 Its Triton patrolling service will be strengthened and a military mandate sought to destroy people-smugglers' boats.

As EU ministers met to discuss the crisis and called an emergency summit for Thursday, fresh distress calls from migrant boats were received.

The Italian coastguard is still recovering bodies from a sinking on Sunday in which up to 700 immigrants were reported drowned - although the death toll could rise as high as 900 if the latest estimates are confirmed.

The passengers of such vessels will typically have paid people-smugglers to help them flee war and poverty in Africa and the Middle East.

The EU's foreign policy chief, Federica Mogherini, said the 10-point package set out at talks in Luxembourg was a "strong reaction from the EU to the tragedies" and "shows a new sense of urgency and political will".

"We are developing a truly European sense of solidarity in fighting human trafficking - finally so."

The measures include an increase in the financial resources of Frontex, which runs the EU's Mediterranean rescue service Triton, and an extension of Triton's operational area. 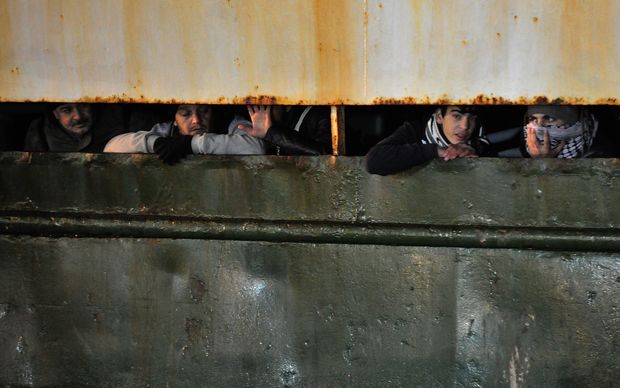 About 400 would-be immigrants arrive aboard the 'Ezadeen' at Corigliano Calabro, Italy. Photo: AFP

The EU had been criticised over the scope of Triton, which replaced the larger Italian operation Mare Nostrum at the end of last year.

The "civilian and military" operation to destroy the people-smugglers' boats would need a mandate signed off by the European Council.

Ms Mogherini stressed the need for action on Libya, where there was "no state entity to control borders".

Human smugglers are taking advantage of the political crisis in Libya to use it as a launching point for boats carrying migrants who are fleeing violence or economic hardship in Africa and the Middle East.

Ms Mogherini said: "We discussed all possible means of support for the formation of a government of national unity in Libya."

The United Nations Chief of Human Rights has called on the European Union to take a more sophisticated, more courageous and less callous approach to the issue.

Zeid Ra'ad Al Hussein said Europe was turning its back on some of the most vulnerable migrants in the world and risked turning the Mediterranean into a vast cemetery.

Mr Al Hussein said the EU should open up legal channels to enable the migrants to enter, while acknowledging that it needs the migrants' low-skilled labour, that refugees had a right to seek asylum, and that families are entitled to live together.

UK PM David Cameron said Sunday was a "dark day for Europe", adding that "search and rescue is only one part. We need to go after traffickers, help stabilise these countries".

Reacting to the new EU plan, Save the Children condemned what it said was a failure to set up a European search and rescue operation.

CEO Justin Forsyth said: "What we needed from EU foreign ministers was life-saving action, but they dithered. The emergency summit on Thursday is now a matter of life and death."

As the ministers met, Italy and Malta said they were working on rescues of at least two boats in distress sailing from North Africa to Europe.

Italian PM Matteo Renzi said one of the vessels was a dinghy off the Libyan coast with about 100-150 people on board. The other was a larger boat carrying 300 people.

Mr Renzi said that his country was working with Malta to rescue the vessels.

He said one was a rubber boat about 50 kilometres off Libya with up to 50 people on board, and the other a larger boat with about 300 on board. 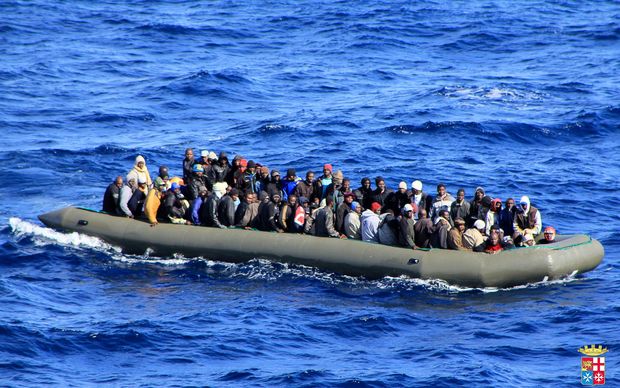 Harrowing scenes off coast of Rhodes

Earlier, the Greek coastguard said a vessel carrying dozens of migrants had run aground off the island of Rhodes. At least three people, including a child, were killed and 93 rescued, it said.

Most of the survivors had to be pulled from the sea, and police fear the death toll could grow as they try to determine how many people were on board.

The boat crash happened a stone's throw from shore, so was caught on film and video by witnesses.

One harrowing clip shows about a dozen migrants, some wearing life jackets, clinging to a chunk of boat debris before being hauled on to land.

There has been a surge in migrants trying to reach Greece's Aegean islands from the Turkish coast in the last 10 days.

More than 700 migrants arrived on the island of Lesbos last week.

Greece's radical left government, which has taken a less hardline attitude to migrants than its predecessors, appealed to local authorities last week to help accommodate the latest wave of refugees.

The country lacks the means and the infrastructure to adequately cope with the growing number of migrants landing on its shores and crossing its borders, most of them en route to northern Europe.

In a joint news conference with Maltese PM Joseph Muscat in Rome, Mr Renzi said military intervention in Libya was "not on the table" but that there could be what he called "targeted interventions" against people-smugglers.

Mr Muscat said Sunday's disaster off Libya, was "a game changer", adding: "If Europe doesn't work together history will judge it very badly."

Only 28 of an estimated 700 migrants on board were rescued, though Mr Muscat said as many as 900 could have been on the ship. 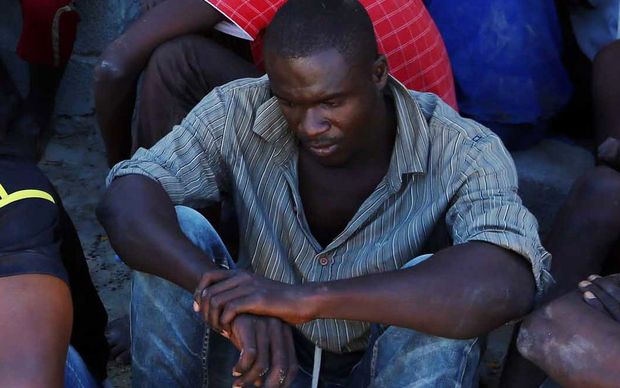 An illegal migrant rests after being rescued by the Libyan coastguard. Photo: AFP

It has also been revealed that representatives of the shipping industry had warned in a letter on 31 March of "a terrible risk of further catastrophic loss of life" on migrant boats in the Mediterranean.

The UN says the route from North Africa to Italy and Malta has become the world's deadliest.

Up to 1,500 migrants are now feared to have drowned this year alone.