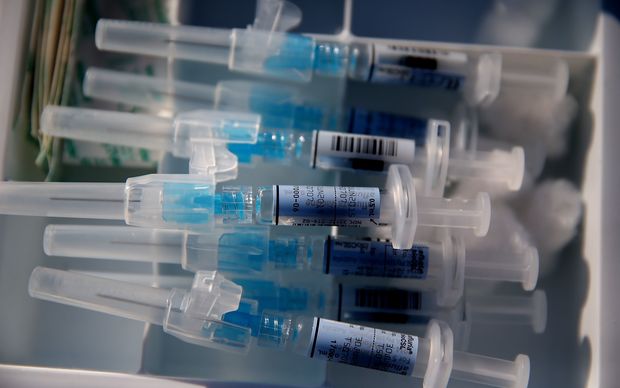 Safety tests on three people, published in the journal Science, showed the immune system could be trained to fight skin cancers.

The tumours are a genetic mess, containing hundreds of random mutations that are different in every patient.

The mutations can change the proteins that stick out from the surface of cells and act like identifying flags.

The team, mainly based in St Louis and Oklahoma City, analysed the genetic mutations to predict the new and unique flags that would be flown by the cancer cells.

A computer algorithm then analysed the new flags, known as neoantigens, to decide which would be the best targets for a vaccine.

Personalised vaccines were given to three patients with advanced tumours in 2013. All had already been treated with another therapy - ipilimumab.

One was in remission and has stayed cancer-free; another still has stable tumours; and the third patient's tumour shrank in the months after the vaccine before returning to its original size and remaining stable.

The team are, at this stage, testing just the safety of the vaccine and whether it provokes an immune response.

They say it was successful on both counts.

One of the researchers, Dr Gerald Linette, said: "Our team is very encouraged by the quality of the immune response directed against the melanoma neoantigens in all three patients.

"Our results are preliminary, but we think the vaccines have therapeutic potential."

The personalised vaccine approach has a number of hurdles to clear.

For a start, proper clinical trials are needed to prove that the immune boost actually makes a difference to controlling the tumour.

There are also questions about cost and the time it takes - currently three months - to develop each person's vaccine.

However, if the approach proves successful it could be useful in other highly mutated cancers such as those found in the lung.

They may also have a role in breast and ovarian cancers in women with BRCA mutations, such as the Hollywood actress Angelina Jolie, which also tend to be very mutated.

Dr Alan Worsley, of Cancer Research UK, said: "This exciting but very early-stage trial shows that it may be possible to create vaccines that are tailored to the specific genetic mistakes in a patient's cancer.

"At the moment it's not clear how effective this immunotherapy would be at killing cancer cells in the body and improving survival, but this promising study sets the stage for creating vaccines that are designed to target each patient's individual tumour in the future."

Professor Caroline Springer, who works on new drugs for melanoma at the Institute for Cancer Research, told the BBC: "I think it's very interesting.

"It's a very positive results and it's good that it's safe, but it's quite early days.

"Ipilimumab can have long-lasting effects on its own. The vaccine has mounted an immune response but it is difficult to tell if that amounts to an anti-tumour response if it is already responding to ipilimumab."