Research from Australia has found that up to two thirds of smokers will die from a smoking-related illness. 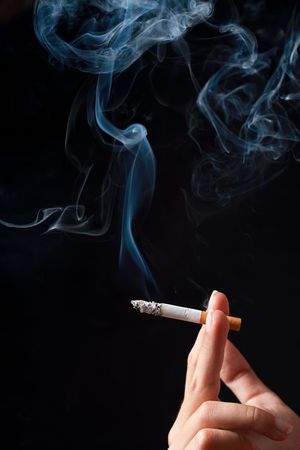 The new study from the Australian National University, published in BMC Medicine, provides what the researchers say is the first large-scale direct evidence on the relationship of smoking to mortality in Australia.

It said of Australia's 2.7 million smokers, 1.8 million would die from preventable cancer.

The paper's author, epidemiologist Emily Banks, said she studied a sample size of 200,000 people over a four-year period.

"We found that people who were current smokers during that time had around a three-fold increase in the risk of dying over that period, compared to people who had never smoked.

"This means that up to two-thirds of smokers will die from their habit."

"People who smoke on average, say, ten cigarettes a day have a doubling in their risk of dying prematurely.

"That's equivalent to being morbidly obese, so having a body mass index of 35 or more, or drinking a bottle of vodka a day."

Stopping smoking reduces the risk and the earlier smokers give up the greater the reduction in mortality.

Professor Banks said the research showed how the deadliness of smoking had evolved over time, as people continued to smoke for longer.

The President of the Australian Council on Smoking and Health Professor Mike Daube said the research adds pressure on governments to step-up anti-smoking campaigns.

"Seven and a half percent of the population now alive will die because they smoked. It will be pretty similar in New Zealand. If that's not a top priority for governments I don't know what can be," said Professor Daube.

"We're calling for (increased anti-smoking campaigns) in Australia and I hope that in New Zealand this will determine the government to move towards that smokefree by 2025 target.

"I hope it will ensure they maintain any action they're taking and that they move ahead with the introduction of tobacco plain packaging, which is such an important step forward," he said.

The New Zealand Cancer Society's Health Promotion Manager Jan Pearson said it was a wake up call for the New Zealand government, which she said was not on track to meet its 2025 smokefree target.

"We can achieve the goal, we've only got ten years," Dr Pearson said.