New aerial ice studies have given scientists an unprecedented insight into how one of the world's largest glaciers is melting.

The research, published in the journal Nature Geoscience, has uncovered a series of tunnels and gateways which are allowing warm water to eat away at the Totten Glacier in East Antarctica, potentially leading to a dramatic rise in global sea levels. 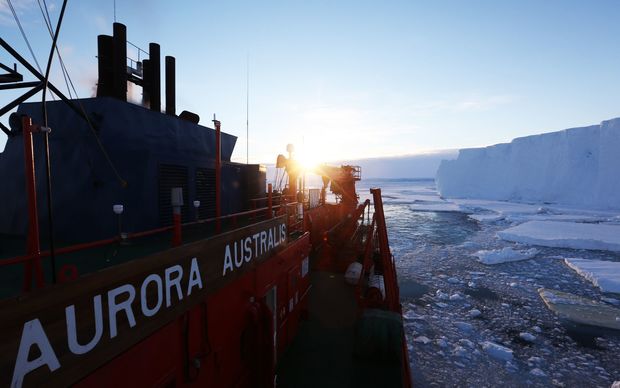 Icebreaker Auroira Australis at the edge of the Totten Glacier in East Antarctica. Photo: AFP (file)

Dr Tas van Ommen from the Australian Antarctic Division said what they found was worrying, the ABC reports.

"We're realising that the East Antarctic ice sheet's probably not the sleeping giant that we thought or at least, the giant's starting to twitch and we're concerned," he said.

Scientists used planes armed with hi-tech monitoring equipment to measure the height and thickness of ice and bedrock topography beneath the massive Totten Glacier.

The aerial surveys covered more than 150,000 kms over five years, and allowed scientists to map and create cross sections of the glacier for the first time.

Dr van Ommen said that there was enough ice in the Totten Glacier alone to raise global sea levels by at least 3.5 metres.

"That three-and-a-half metre sea level rise would take many centuries to roll out," he said.

"But even in this century, the last IPCC [Intergovernmental Panel on Climate Change] report said that if this kind of thing happens, it's going to add several tens of centimeters of sea level rise to their estimate of one metre."

"The Totten Glacier drains an area twice the size of Victoria, so there's an awful lot of ice in there, grounded below sea level, so it's got a fair potential for sea level rise," he said.

Scientists plan to use more aerial surveys and eventually underwater rovers to better understand the sleeping giant, before it wakes up.