Police in eastern India are searching for a group of six men who gang-raped an elderly nun in West Bengal. 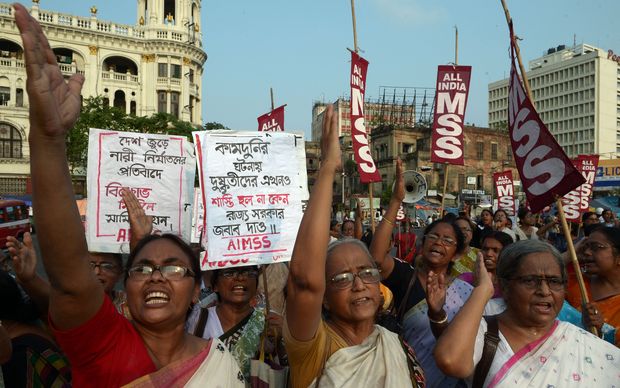 The men ransacked the convent school in Ranaghat early on Saturday morning (local time) and stole money before entering the convent itself.

The 74-year-old nun is now recovering in hospital.

Christian groups have recently held protests in the Indian capital, Delhi, saying they are being targeted and demanding better protection.

The Archbishop of Calcutta, Thomas d'Souza, told the BBC that security cameras inside the Convent of Jesus and Mary School show the faces of the six men who carried out the assault.

They first ransacked the school principal's office and classrooms before entering the convent itself.

"There are only three Sisters in the community," he said.

"One sister was molested badly. The other two, and a guard, were tied to chairs."

The men also stole money from the school, he said, vandalised the chapel, broke open the tabernacle and took away the ciborium, the sacred vessel used during Mass.

The school is well-known and has been open for 19 years, he added.

The attack comes at a time of growing concern about sexual violence against women and there has been increased media reporting of rapes and assaults.

The background to this attack is not yet clear. But Christian groups elsewhere in India have expressed concern that they are increasingly being targeted.

Some highlight a series of recent attacks by vandals on churches in Delhi and call on the authorities to do more to protect them.