Indian investigators say they will not charge five men detained earlier this year on suspicion of raping and murdering two teenage girls in a case that sparked global outrage.

The girls aged 14 and 15, who were cousins, were found hanging from a tree in an impoverished village in northern Uttar Pradesh state in May. 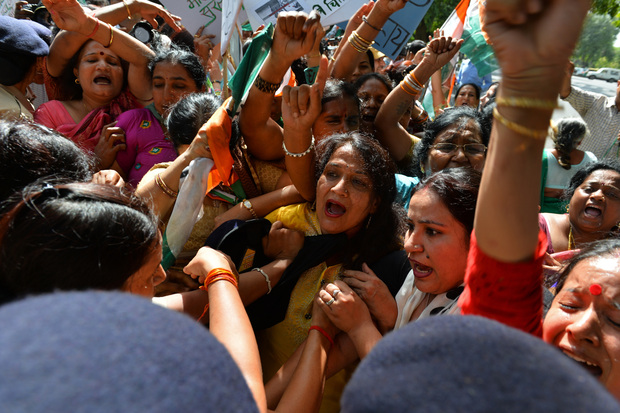 Rape cases have sparked angry protests. This demonstration was prompted by a senior government minister describing a fatal attack in New Delhi as a "small incident". Photo: AFP

The Central Bureau of Investigation (CBI), India's top investigative agency, said it would not "as yet" file charges against the men, citing a lack of evidence, but did not rule out future charges.

The men are expected to be released on Friday after 90 days in detention, the maximum time that a person can be held without being charged in India.

"Based on our investigations so far, we are not going to file the charge-sheet at this stage. However, no one has been given a clean chit as yet," CBI spokeswoman Kanchan Prasad told AFP.

The girls were reported at the time to have been gang-raped and murdered after going into the fields to relieve themselves because their homes, like most in their village in Badaun district, lacked toilets.

The attack sparked public outrage after the family complained of police apathy towards them because they came from a lower caste.

Media reports say the CBI's decision was based on forensic tests that had ruled out sexual assault in the case.

India brought in tougher rape laws last year for crimes against women after the fatal gang-rape of a physiotherapy student on a bus in New Delhi in December 2012.