Police in India say they have now arrested all suspects in connection with the gang rape and murder of two teenage cousins.

Three suspected attackers have been detained, along with two policemen accused of dereliction of duty and criminal conspiracy.

The two teenage girls were gang raped, then hanged from a tree in the state of Uttar Pradesh, which has pledged to set up a fast-track court to prosecute the crime.

Two police officers have been sacked and charged with criminal conspiracy for refusing to help search for the missing girls.

Three men have been arrested for the crime.

The father of one of the girls said he was ridiculed by police when he sought help in finding his missing daughter, who is from the Dalit caste at the bottom of India's traditional social hierachy.

He said that when the police found out he was from a lower caste, they "refused to look for my girl". 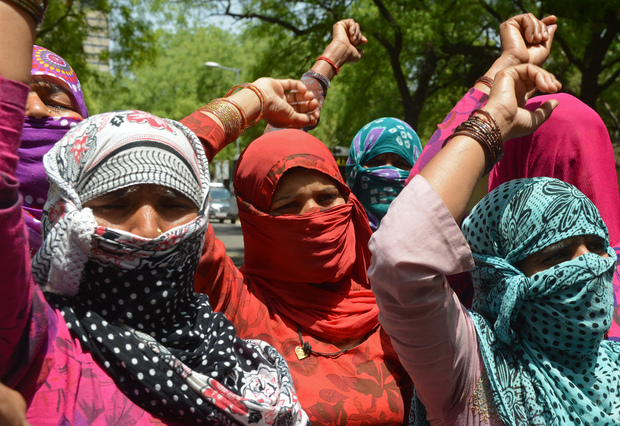 Demonstrating villagers protest in New Delhi against the gang-rape of a lower caste Dalit in nearby Haryana state. Photo: AFP

The sacked officers were charged with criminal conspiracy, police said on Friday.

Meanwhile, reports have emerged that two more gang rapes of minors occurred in the state this week.

The chief minister of Uttar Pradesh reacted angrily when asked about the rising number of rape cases at a news briefing.

"You are safe, why are you bothered?" Akhilesh Yadav told a journalist. "No other state has the kind of police control room we have here. If there is any incident, we will take action."

Senior police official Atul Saxena earlier announced there would be a "thorough investigation" into the allegations of caste discrimination by police.

Although both the victim and the accused in the latest case belonged to a group known as "Other Backward Classes", the victims were lower in that hierarchy.

The girls, two cousins aged 14 and 16, went missing in Badaun district on Tuesday night. They had apparently gone out to relieve themselves as they had no toilet at home.

Their bodies were discovered the following day. A post-mortem examination confirmed multiple sexual assaults and death due to hanging.

Campaigners have highlighted the lack of sanitation in rural areas as being a risk to women's security as well as their health, as they are often attacked when having to go out to use the toilet, particularly at night.

Scrutiny of sexual violence in India has grown since the 2012 gang rape and murder of a student on a Delhi bus.