Electronics manufacturer Samsung is warning people not to discuss personal or sensitive information within earshot of its smart televisions. 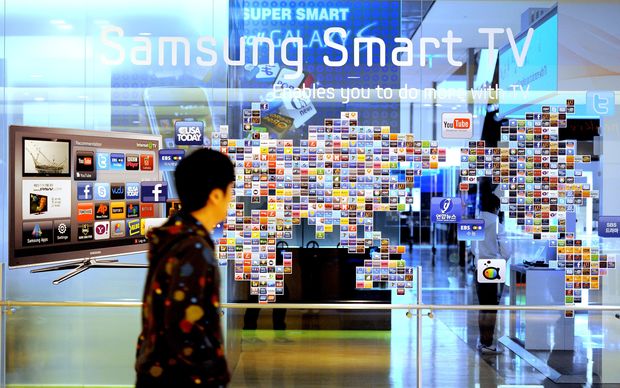 Samsung issued a privacy warning for smart TVs that use its voice activation feature. Photo: AFP

The South Korean company says voice recognition software used by the TVs can listen to the conversations and share any captured data.

The warning applies to TV viewers who control their Samsung Smart TV using its voice activation feature, the BBC reports.

Such TV sets "listen" to some of what is said in front of them and may share details they hear with Samsung or third parties, it said.

Privacy campaigners have compared the TVs to the telescreen monitoring devices in George Orwell's novel, 1984 and are describing Samsung's advice as "outrageous".

The warning came to light via a story in online news magazine The Daily Beast which published an excerpt of a section of Samsung's privacy policy for its net-connected Smart TV sets.

The policy explains that the TV set will be listening to people in the same room to try to spot when commands or queries are issued via the remote. It goes on to say: "If your spoken words include personal or other sensitive information, that information will be among the data captured and transmitted to a third party."

Mr Harris told Morning Report data was being sent to a third party which was tracking how people use the TV, to make it smarter, but was picking up anything else that people might be saying as well.

In response to the widespread sharing of its policy statement, Samsung has issued a statement to clarify how voice activation works. It emphasised that the voice recognition feature is activated using the TV's remote control.

It said the privacy policy was an attempt to be transparent with owners in order to help them make informed choices about whether to use some features on its Smart TV sets, adding that it took consumer privacy "very seriously".

A cyber security consultant said consumers are increasingly embedding the internet into their lives and need to wise up about who is collecting their personal information.

Chris Hails of Netsafe said people should make sure they look at their devices' security settings, to avoid security exploits.

"All of us need to be more aware that everything that we have with a connection to the internet could, if not leak data, it could allow people to come into our networks at home and potentially listen in on or monitor what we get up to."