A United States jury has ordered Samsung Electronics to pay $NZ138 million to Apple, less than 10 percent of what Apple had sought, in the latest round of their mobile phone patent litigation. 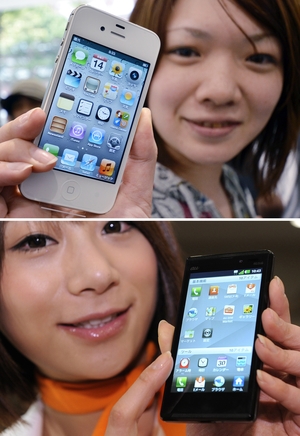 Apple (iPhone 4S at top) said the South Korean company Samsung could not have competed in the smartphone market without copying its flagship product. Samsung (Galaxy S II at bottom) said Apple had vastly exaggerated the importance of its patented iPhone features. Photo: AFP

Jurors awarded the iPhone maker about $NZ1 billion after a 2012 trial in San Jose, but Apple failed to persuade a U.S. district judge to issue a permanent injunction against the sale of Samsung phones in the United States.

The court also ruled that Apple infringed Samsung's patents and awarded $158,000 in damages.

Apple had sought $2.2 billion after accusing Samsung of infringing five of its patents covering functions such as the "slide to unlock" from its devices.

Samsung denied any wrongdoing and sought $6 million after arguing Apple had infringed two of its smartphone patents related to camera use and video transmission.

"Though this verdict is large by normal standards, it is hard to view this outcome as much of a victory for Apple,'' said Brian Love, a Santa Clara University law professor.

Apple and Samsung have been fighting patent battles for years and across many countries.

Two years ago, a separate jury ordered Samsung to pay Apple $930 million after finding it had used Apple technology.

That verdict is still being challenged by Samsung.