Jordan has responded to the Islamic State's (IS) execution of one of its air force pilots by hanging a jailed Iraqi woman jihadist whose release IS had demanded. 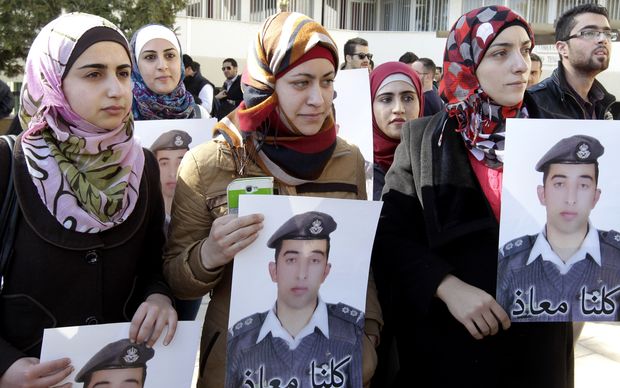 Anwar Tarawneh (centre), wife of Maaz al-Kassasbeh, at a rally in Amman, Jordan, on Tuesday calling for his release. Photo: AFP

The country's government had earlier promised what it called an earth-shaking response to avenge the pilot's murder.

In a new level of brutality, IS released a video purporting to show Maaz al-Kassasbeh, 26, burning to death.

Lieutenant Kassasbeh was captured in December last year when his plane came down during the US-led operation against IS extremists in Syria.

Jordan had been attempting to secure his release by offering to free Sajida al-Rishawi, who had been on death row for her role in hotel bombings in Amman in 2005.

A security source in Jordan said another senior al-Qaeda prisoner - Ziyad Karboli - had also been executed.

He was sentenced to death over plots to wage attacks against the pro-Western kingdom in the last decade.

"The revenge will be as big as the calamity that has hit Jordan," he said.

Correspondent Alisa Reznick, in the Jordanian capital Amman, said this morning that authorities were ushering IS prisoners to a central prison where, it was reported, they were being executed.

"A couple of days ago Jordan said it would begin executing all of its ISIS-related prisoners if they had found out that the pilot was in fact dead," she told Morning Report.

"It looks like, by unofficial reports of course, that this is what's happening." 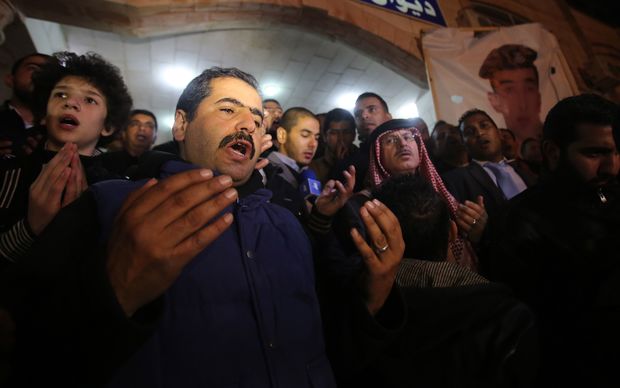 US President Barack Obama said the video, if real, would redouble the determination of the US-led alliance to degrade and destroy IS. He said it would be another sign of the "viciousness and barbarity" of the militants.

In New Zealand, Prime Minister John Key condemned the killing of the pilot as brutal and ugly, and said it showed a level of behaviour that was totally unacceptable.

"Oh look, I think everyone around the world is utterly outraged at the brutality of ISIS. I mean, these people constantly demonstrate how ugly they can be, how brutal they can be and how they're a force that can't be allowed to continue to undertake these actions."

Mr Key said this confirmed his view that most New Zealanders would expect this country to play its part in the fight against IS.

Jordanian state television reported the pilot had been killed a month ago, on 3 January.

The release of the video of his purported murder came days after IS beheaded a second Japanese hostage within a week.

IS had vowed to kill the second Japanese man, Kenji Goto, and Lieutenant Kassasbeh by sunset on 29 January unless Amman handed over Rishawi.

Saudi Arabia, the United Arab Emirates, Jordan and Bahrain are taking part in the coalition air strikes in Syria.

Australia, Belgium, Britain, Canada, Denmark, France and the Netherlands are participating in Iraq.