The frozen surface of comet 67P is a diverse landscape that includes dust dunes, huge icy boulders, towering cliffs and deep crevasses, according to new data from the Rosetta spacecraft. 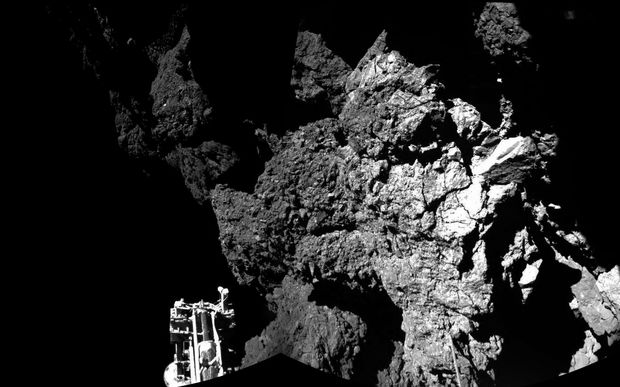 Seven new papers covering the early findings of the European Space Agency's Rosetta encounter with the four-kilometre-wide comet have been published today in the Journal Science.

The studies painted a detailed portrait of the comet, describing its surface features, shape and composition.

The data showed that the comet's frozen crust had a far more varied terrain than previously thought.

"These images are stunning, they've left me breathless, there are details that we couldn't have imagined just a few months ago," says one of the study's authors Dr Simone Marchi of the Southwest Research Institute in Boulder Colorado.

"The main challenge for us now is to make sense of what we're seeing and come up with a picture that can explain all this diversity."

While some dust dunes were smooth, others have ripples and tails which appear to have been formed by winds.

"We see piles of boulders, most likely due to the collapse of some surface structures producing avalanches," says Marchi.

"Cliffs exposed by these rock falls at the comet's neck are allowing us to see details of the internal structure of 67P."

The comet was composed of a large and small lobe connected by a saddle-shaped neck. 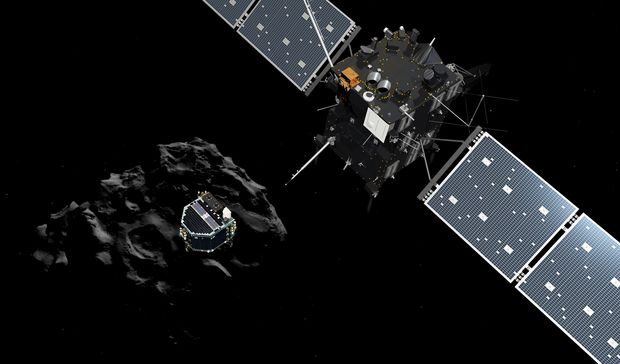 An artist impression of the European probe Philae separating from its mother ship Rosetta and descending to the surface of comet 67P. Photo: AFP / ESA / Rosetta / Philae / CIVA

The neck between the two lobes remained one of the most fascinating questions about comet 67P.

Some scientists thought it resulted from material evaporating into space causing the comet to split into two separate bodies, while others believed it started as two separate comets, which melted together to form a single body.

"Both options are still on the table," Marchi said.

"Personally, I think it's more likely that these are two different objects that came together some point in time."

The camera filters showed the smooth areas at the base of the neck are different to other regions of the comet indicating the possibility of ices.

Until recently the neck was producing most of the out-gassing jet activity.

Microwave readings of temperature patterns beneath 67P's surface suggested most of the water ice was lost as it sublimates into a gas from the neck region of the comet.

However as the comet moved closer to the Sun, scientists were seeing some out-gassing flows originating from numerous circular depressions or pits on the surface of the lobes.

Underneath the surface lies a nucleus made up of dust, rock, and frozen gas that was less dense than water.

Gravitational readings did not show evidence of any major internal voids, implying instead a rather porous and fluffy structure.

Rosetta has detected volatile gases; carbon monoxide, carbon dioxide, and water vapour, jetting out of 67P, which was telling scientists about the comet's internal composition and its origins. 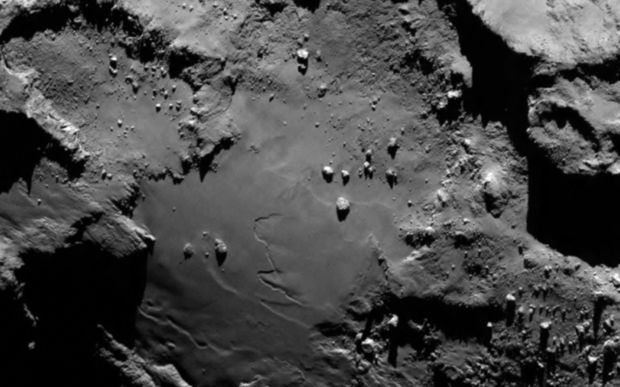 A close-up photo showing the smooth region on the "base" of the "body" section of comet 67P. Photo: AFP / ESA / Rosetta / Philae / CIVA

"We're seeing different gases sublimating into space at different times, and this ties right back to the question how primordial are comets and what are they made of," says a co-author of one of the studies, Dr Dennis Bodewits of the University of Maryland.

"We know that primordial disks around stars have carbon monoxide, carbon dioxide, and water, and the ratios of these gases tells you where in the disk these comets formed."

"The closer to the Sun, the more water you have because carbon monoxide and carbon dioxide have lower sublimation temperatures."

Rosetta became the first spacecraft to go into orbit around a comet in August last year.

History was made again in November when Rosetta's Philae lander touched down on frozen comet's surface.