A large crocodile that lunged at two people walking at a waterway on the side of a highway in Kakadu National Park in Australia has been killed by rangers. 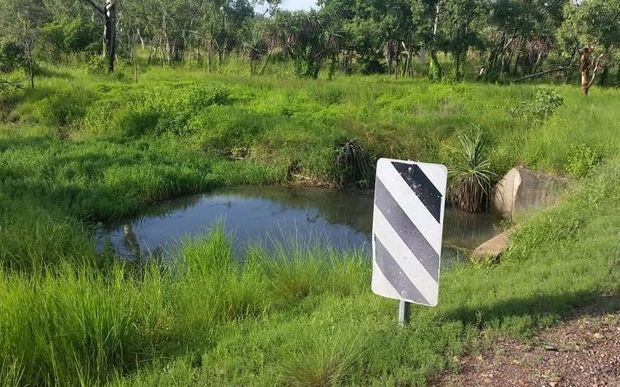 The culvert where the crocodile was found in Kakadu National Park. Photo: Supplied - Parks Australia

The 4.2-metre crocodile is believed to have been involved in the attack at a culvert on the side of the Arnhem Highway, 28 kilometres west of Jabiru on Tuesday. 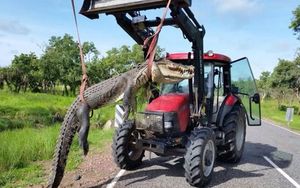 A tractor was needed to remove the 4.2-metre crocodile. Photo: Supplied - Parks Australia

Parks Australia said the pair were walking through long grass when the croc lunged at them.

"Luckily, the two escaped harm and raised the alarm with our rangers," a spokeswoman for Kakadu National Park said.

"Our rangers headed straight out to the scene, and they could clearly see large croc tracks in the grass, heading into the water, but no sign of the croc."

The rangers believed the croc was dangerous and returned later that night when they believed they had a better chance of spotting the crocodile's eyes reflecting in search lights.

"They quickly located a crocodile fitting the description, a 4.2-metre croc that was missing a portion of its tail and appeared underweight," the spokeswoman said.

"The animal was shot and removed in the interest of public safety."

The animal was so large that staff had to use a tractor to lift it up to the road.

"It's a timely reminder that crocodiles are extremely active at this time of year, and you should assume that they're present in all of Kakadu's rivers and creeks," the spokeswoman said.

She said it was not safe to go strolling off designated roads and pathways, particularly close to water.

"We're all relieved to see these two people walk away unharmed," she said.

Northern Territory (NT) police said the two people who the crocodile lunged at were fishing in the area.

During the wet season water flows freely around much of Kakadu National Park, and numerous culverts, where water flows under roads, become swollen.

They are popular fishing spots for land-based anglers trying to catch barramundi.

NT Parks and Wildlife Commission's senior ranger for crocodile management, Tommy Nichols, said culverts all joined up to major river systems and people had to be on the look out for crocodiles in these areas.

He said Kakadu rangers were justified in killing the crocodile, which may have been difficult to catch live, because it was menacing towards people.

To grow to four metres the crocodile would have been at least 16 years old, Mr Nichols said.