A rarely sighted 'living fossil' shark has been caught off the Australian coast by local fishermen.

The frilled shark, whose ancestry dates back 80 million years, turned up in waters off south-eastern Victoria. 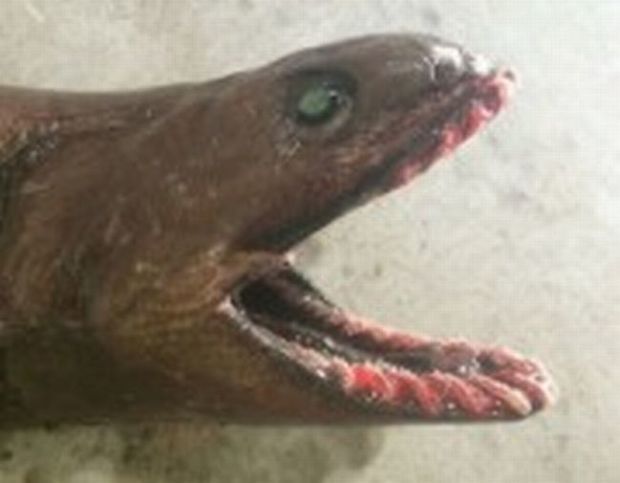 The hideous and mildly terrifying fish is often termed a living fossil, according to the South East Trawl Fishing Association (SETFIA).

It was caught on a fishing trawler in waters near Lakes Entrance in the state's Gippsland region.

Simon Boag from SETFIA said it was the first time in living memory that a frilled shark had been sighted.

"We couldn't find a fisherman who had ever seen one before," he told the ABC.

"It does look 80 million years old. It looks prehistoric, it looks like it's from another time!"

He said local fishermen were left scratching their heads at the sight of the two-metre-long creature, whose head and body resemble an eel, but whose tail is more reminiscent of a shark.

Its common name comes from the frilly or fringed appearance of its six pairs of gill slits.

Australia's national science agency CSIRO confirmed it to be a frilled shark, and while the species is known to the scientific community, it was a nonetheless rare and bizarre find for local fishermen.

"Good for dentists, but it is a freaky thing. I don't think you would want to show it to little children before they went to bed."

The species has been found as deep as 1500 metres, but generally it lives in waters shallower than 1200 metres.

Mr Boag said this frilled shark was caught at 700 metres, but there should not be any concern about repeat catches.

"Almost all the grounds deeper than 700 metres are closed to trawling, so there wouldn't be any pressure on them and there'd be very few caught," he said.

"This guy was just unlucky."

After being declined by the CSIRO, the frilled shark is believed to have now been sold.