US President Barack Obama has announced measures to help working families gain from a growing economy in his annual agenda-setting State of the Union Address to Congress. 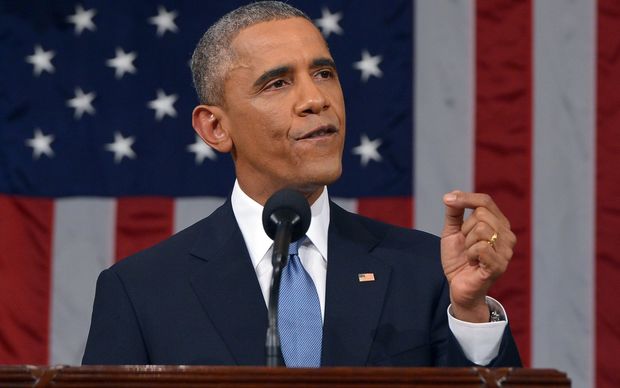 Mr Obama's strategy, which he described as "middle-class economics", included raising taxes for the rich.

He told Congress the US had turned a new page after the worst recession since the Depression.

Mr Obama said in two weeks he would present a practical non-partisan budget.

Watch a video of the speech via The White House/YouTube

But the plans are unlikely to make it past a Republican-controlled Congress, the BBC reported.

Mr Obama said he planned to build on economic growth by providing working families with help in the form of sick and maternity leave and affordable child care.

"Middle-class economics works. Expanding opportunity works. And these politics will continue to work, as long as politics don't get in the way," he said.

He also pledged that Congress should pass a law to give women the same wages as men for doing the same job. "It's 2015. It's time," he said.

"This plan is your chance to graduate ready for a new economy, without a load of debt," he said.

In a policy which is likely to bring him into direct conflict with the Republican-led Congress, Mr Obama pledged to close tax loopholes on large inheritances, raise capital gains tax on the richest earners from 23.8 percent to 28 percent and introduce new fees on US financial firms with assets about $US50 billion.

Some senior members of the Republican party have already dismissed this as "class warfare". 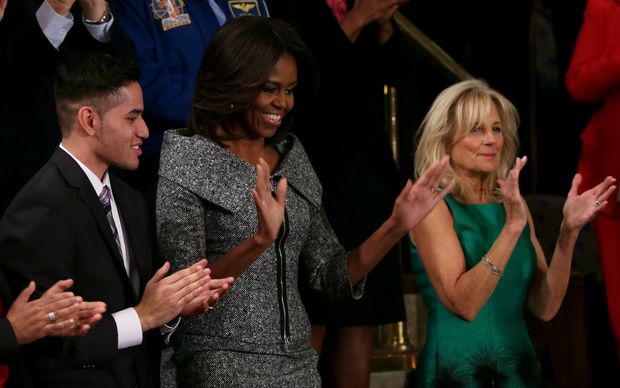 The recent cyber attacks against US were also on the president's agenda as Mr Obama urged Congress to pass legislation to give better protection against them.

"If we don't act, we'll leave our nation and our economy vulnerable," he said.

On foreign policy, Mr Obama said America reserved the "right to act unilaterally" in hunting down terrorists and called on Congress to pass a resolution to authorise the use of force against IS.

But he also stressed that his administration will continue to reject offensive "stereotypes of Muslims".

The president reiterated his belief that the US could negotiate an agreement to prevent Iran gaining nuclear weapons and said he would veto any new sanctions bill which threatens this.

He said his decision to end his America's long-standing policy on Cuba and try something new had the potential to "end a legacy of mistrust in our hemisphere".

Alan Gross, who was recently released after spending five years in a Cuban prison, was among Michelle Obama's guests for the speech.

In ending his address, Mr Obama said he was optimistic he could work with Congress, despite months of political gridlock. 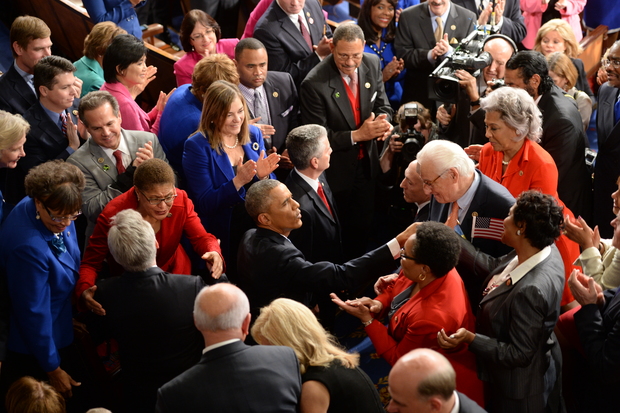 But consensus with the Republican party on many of the issues he outlined is unlikely.

Responding to his speech, Republican senator and rising star Joni Ernst said Americans have not seen solutions from Mr Obama and criticised his health and immigration policies.

"Americans have been hurting, but when we demanded solutions, too often Washington responded with the same stale mindset that led to failed policies like Obamacare," she said

The senator called on Mr Obama to work with Republicans on issues they might have common ground - including a trade deal and tax code reform.

For the first time, the White House released an advance copy of the president's annual speech online to the public before it began today - rather than sharing an embargoed copy with reporters.

As Mr Obama was crossing Washington to Capitol Hill to address Congress, his office sent out his script in what they said was an attempt to stimulate democratic debate beyond the political class, AFP reported.

"There is a ritual on State of the Union night in Washington. A little before the address, the White House sends out an embargoed copy of the president's speech to the press," the White House said.

"The reporters then start sending it around town to folks on Capitol Hill to get their reaction, then those people send it to all their friends, and eventually everyone in Washington can read along, but the public remains in the dark ... This year we change that."

The decision surprised journalists, who had already reported pre-released excerpts and were sharing jokes and speculation on Twitter about the upcoming speech, fully expecting to see it before the online public.