An American Congressional delegation has arrived in Havana in the first such visit since the United States and Cuba agreed to restore ties severed in 1961. 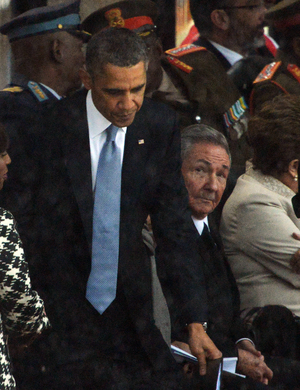 The first public sign of a rapprochement came when Obama and Castro shook hands during the funeral of Nelson Mandela in South Africa in December 2013. Photo: AFP

The Democrat politicians plan to meet Cuban officials and civilian leaders to discuss practical measures required for the normalisation of relations.

The thaw in relations was announced on 17 December by President Barack Obama and his Cuban counterpart, Raul Castro.

Earlier this week, Cuba completed the release of 53 political prisoners.

The BBC reports the measure was agreed as part of the agreement.

"We have all been to Cuba before, and we strongly support the president's new direction for our policy towards Cuba," said Senator Patrick Leahy.

New travel and trade rules between the US and Cuba came into effect on Friday, also as part of the historic deal.

Americans will be able to take home up alcohol and tobacco from Cuba up to the value of $100.

US credit and debit cards can be used there and there will be no more limits on how much money US citizens can spend in Cuba each day.

While ordinary tourism is still banned, the new regulations will allow US citizens to travel to Cuba for any of a dozen specific reasons without first obtaining a special licence from the government.

Although the latest moves put a large dent in the US trade embargo against the island's communist government, only Congress can lift it completely.

The first high-level talks between Cuba and the US will be held in Havana next Wednesday and Thursday.

The US delegation will be led by Assistant Secretary of State Roberta Jacobson.