When a masked gunman burst into the Charlie Hebdo editorial meeting shouting "Allahu akbar" and fired off a hail of bullets, journalist Laurent Leger threw himself behind a corner table and hid as horror unfolded around him. 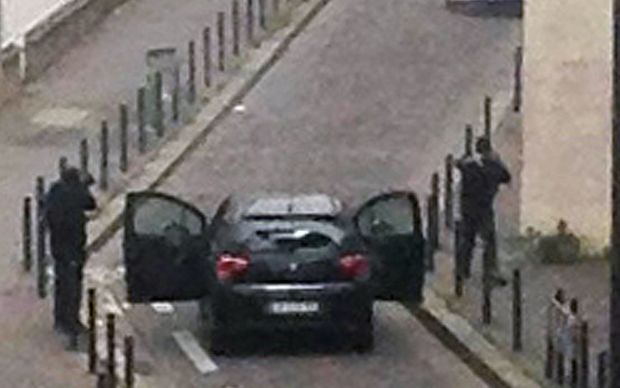 The journalists were wrapping up their weekly meeting when they heard what sounded like "fireworks" outside, said Leger, whose reflex to hide would make him one of few survivors of the bloodbath.

He looked like a member of the special forces, "he was masked, dressed all in black, he was holding his weapon with both hands," Leger told France Info radio.

He said the gunman called out "Charb!" the name of editor-in-chief and cartoonist Stephane Charbonnier who was living under police protection after receiving death threats for the magazine's provocative content mocking Islam.

"And then the shooting started, the smell of gunpowder... by chance I threw myself behind the table and he didn't see me ... a few seconds, and everyone was on the ground," he said, adding the gunman had shot at random.

Leger said that as the satirical Charlie Hebdo team were "jokers", he at first thought it may be some kind of a prank.

But the reality quickly sank in as the sharp sting of gunpowder hit his nose and one by one his colleagues crumpled to the ground.

Helpless, the veteran reporter huddled tightly in his hiding place.

"I saw the others on the ground, the sound of explosions, then suddenly there was silence. A long silence." 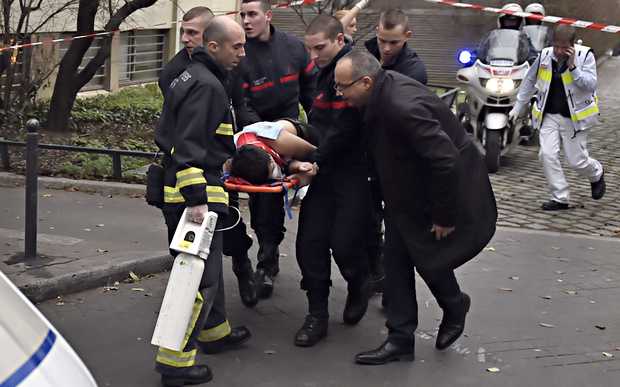 A victim is taken away on a stretcher. Photo: AFP

Leger said he heard footsteps and realised the gunman was returning.

He heard the man exchange a few words with someone else and realised there were two attackers.

When the coast was clear he and others who were not hit got up to try and help their colleagues. Leger said he held the hand of the weekly's webmaster while waiting for help to arrive.

"I saw a lot of blood, I saw half the editorial team on the ground," he said. "I saw horror."

"I still don't know how I managed to escape." 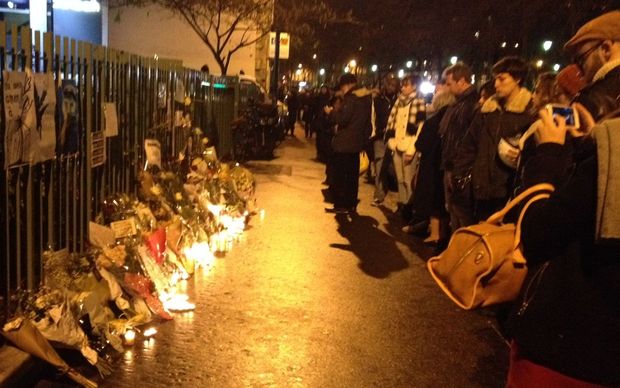 Some of the country's best-known cartoonists such as Charb, his police guard and an invited visitor were among the 10 who died in the room.

A maintenance man was shot in the reception area and another policeman was murdered outside as the two attackers fled. Eleven people were wounded, four of them seriously.

"It all happened so fast ... it still hasn't sunk in for anyone in this small team of survivors that it really happened."

Clearly stunned, the journalist described a tight-knit group of colleagues whose job centred on humour, almost wiped out by the attack.

But the weekly's biting irony and irreverent style made it a key target of jihadist groups.

The publication defiantly refused censorship as time and time again it published pictures of the Prophet Mohammed, stoking fury among Muslims who see it as the highest form of blasphemy.

Its offices were firebombed in 2011 and Charbonnier in 2013 appeared on a "Wanted Dead or Alive" list published in Al-Qaeda's magazine, Inspire.

But to Leger, the massacre was "unimaginable. Charb felt more threatened than the others, we stopped thinking about it."

And as the country plunges into mourning, Charlie Hebdo has refused to be cowed by terror, and with the help of several other French media plans to put out next week's issue.

The newspaper's lawyer, Richard Malka, said one million copies would be printed instead of the normal 60,000.

"It's very hard. We are all suffering, with grief, with fear, but we will do it anyway because stupidity will not win," said columnist Patrick Pelloux.

Leger said it was "important" to publish something.

"I don't want it to be an issue about death. I want a magazine on the challenge to exist, to say things, to fight against idiocy, against human stupidity, against all fundamentalism."