Divers are making another attempt to reach objects believed to be the wreckage of an AirAsia plane that crashed off Borneo with 162 people on board. 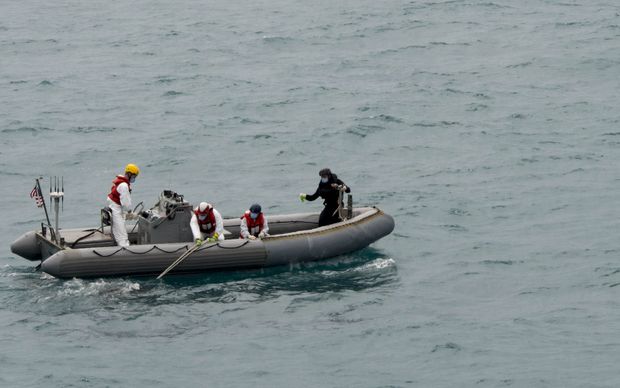 Previous attempts by divers have failed because of zero visibility on the sea floor and bad weather. Photo: AFP / US Navy / Brett Cote

"Our focus is to retrieve as many bodies as possible and we believe some of the victims are still trapped in the main body of the aircraft."

AAP reports that search teams have recovered 37 bodies but the remains of most victims are thought to still be in the plane.

Flight QZ8501 was flying from Surabaya, Indonesia to Singapore on December 28 when it disappeared from radar.

Previous attempts by Indonesian Navy divers failed because of zero visibility on the sea floor and bad weather.

Rescue officials said ships equipped with sonar technology had detected four large objects that they suspect are parts of the Airbus A320-200's fuselage.

Searchers were also racing against time to find the cockpit voice and flight data recorders, which could shed light on what went wrong with the flight.

The aircraft did not send a distress signal before it disappeared from radar screens.

On Monday, the Transport Ministry announced it had suspended airport officials as part of an investigation into flight schedule violations by AirAsia, and possibly by other airlines.

The ministry said AirAsia had approval to use the route on Mondays, Tuesdays, Thursdays and Saturdays, but not on Sundays, the day the aircraft crash.

Civil aviation chief Djoko Murjatmodjo acknowledged airport authorities had allowed AirAsia's Sunday flight for almost three months which was due "a difference in data used by the ministry and airport officials".