Search teams have recovered four more bodies from the Java Sea as the hunt to find the main wreckage of AirAsia flight QZ8501 entered a second week. 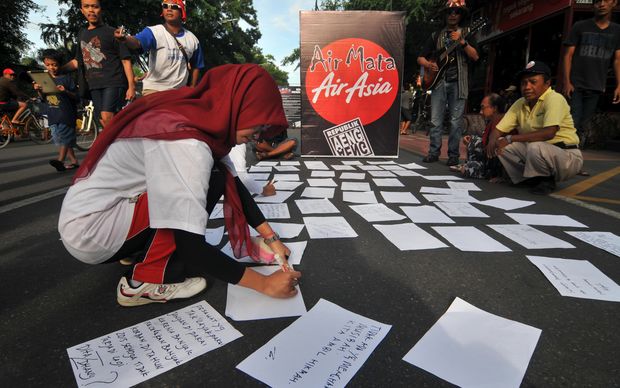 Indonesian people write down their expectations and hope on a sheet of white papers during the ceremony for the passengers of AirAsia flight QZ850. Photo: AFP

But bad weather had forced divers to suspend their bid to find the plane's fuselage, where most of the bodies are believed to be trapped.

The plane, which was carrying 162 people, crashed last Sunday.

It was en route from Surabaya in Indonesia to Singapore.

Bad weather is believed to be the biggest factor in the crash although the Airbus A320's "black boxes", or flight data recorders, had yet to be located, the BBC reported.

Mr Soelistyo said on that Singapore navy vessel RSS Persistence had recovered one body, while US navy ship USS Sampson had brought three more back to the Indonesian town of Pangkalan Bun.

Nearly 30 ships were now involved in the search operation, as well as six planes and 14 helicopters.

There were hopes the weather would improve yesterday, but conditions once again hampered efforts to find the plane's main wreckage.

Search teams found four large objects thought to be debris from the plane on Saturday, with the largest measuring 18m by 5.4m, at a depth of 30m.

A fifth object, measuring 9.8m by 1.1m, was located on the seabed, Mr Soelistyo told reporters. 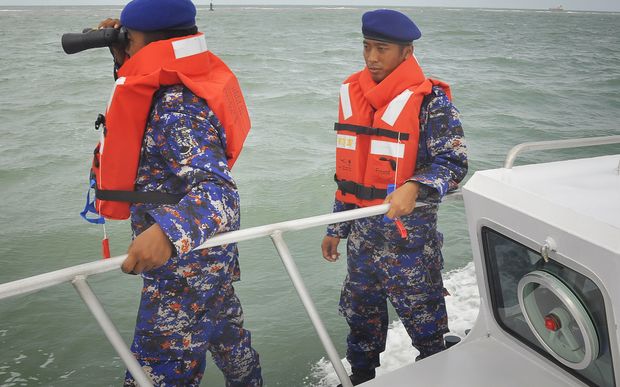 Members of the Central Java Water Police patrol the waters north of Java in the search for victims of the AirAsia QZ8501 disaster. Photo: AFP

Dozens of divers from Indonesia and Russia have been deployed to the search area, which has been enlarged to allow for tides sweeping bodies and debris further afield.

They attempted to survey more of the seabed on Sunday but "visibility at the sea bottom was zero," Mr Soelistyo said.

Remotely operated cameras were being used to try to photograph the objects, but waves up to 5m high and strong currents made their use difficult.

National Search and Rescue deputy chief Tatang Zainudin said: "We are racing with time and weather in running this mission."

Officials have said the plane was travelling at 9,753.6m when the pilot's last communication was a request to climb to 11,582.4m to avoid bad weather.

It has emerged that AirAsia did not have official permission to fly the Surabaya-Singapore route on the day of the crash, but was licensed on four other days of the week.

The Indonesian authorities suspended the company's flights on this route pending an investigation. AirAsia said it will "fully co-operate".

There were 137 adult passengers, 17 children and one infant, along with two pilots and five crew, on the plane - the majority Indonesian.

AirAsia previously had an excellent safety record, with no fatal accidents involving its aircraft.