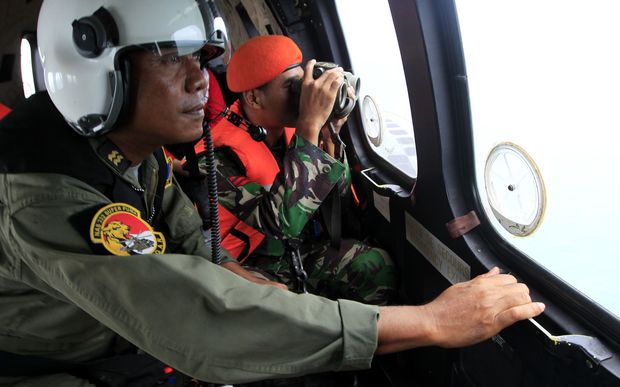 Indonesian crew members observe the surface of the sea during the search for AirAsia Flight QZ8501. Photo: AFP

It is hoped the parts contain the aircraft's black-box flight recorders, which are crucial to determining the cause of the crash.

Search and rescue agency chief Bambang Soelistyo told reporters that the huge relief operation came across the objects in the Java Sea off the island of Borneo late on Friday night.

"With the discovery of an oil spill and two big parts of the aircraft, I can assure you these are the parts of the AirAsia plane we have been looking for," Soelistyo told reporters in the capital Jakarta.

He said the larger of the objects was around 10 metres by five metres.

"As I speak we are lowering an ROV (remotely operated underwater vehicle) underwater to get an actual picture of the objects detected on the sea floor. All are at the depth of 30 metres," Soelistyo said.

He added however that a strong current was making it difficult to operate the ROV.

Rough weather in recent days has hampered the search for bodies and the fuselage of the Airbus A320-200, which disappeared from radar and crashed into the sea during a storm.

So far, 30 bodies have been recovered in the search, which had been narrowed Friday to an area of 1575 square nautical miles - a tenth of the size of Thursday's search - with 29 ships and 17 aircraft engaged in the operation.