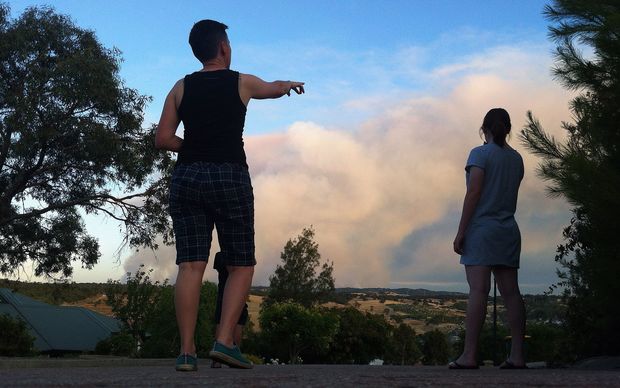 A bushfire in the Adelaide Hills burning at Humbug Scrub near Kersbrook, north-east of Adelaide destroyed four houses and two sheds on Friday, with crews working through the night to contain the fire, the ABC reported.

One house was destroyed in a fast-moving grass fire at Moyston in western Victoria that sparked an emergency warning lasting several hours on Friday.

The Bureau of Meteorology (BoM) has predicted temperatures of more than 40degC across Victoria and temperatures in the high 30s for South Australia.

Strong swirling winds in the Adelaide Hills were causing problems for firefighters on Friday, with speeds of up to 40 kilometres per hour, the Country Fire Service (CFS) said.

CFS spokesperson Brenton Eden said the wind in the Sampson Flat fire area was expected to have completed a full 360-degree change by early morning.

"That poses serious challenges for everyone on the ground, we need to cover the entire perimeter of it [the fire] ... people need to be aware of unpredictable fire travel," he said.

"Conditions [on Saturday] could see that we have fires that again may threaten communities across the state," he said.

Mr Eden said an incinerator was the likely cause of the fire, which had also destroyed a firefighting appliance, but no one was hurt.

He said 150 firefighters, 25 appliances and five water carriers were at the scene overnight and communities around the fire including Kersbrook, Humbug Scrub, Birdwood and Gumeracha were instructed to remain "very, very vigilant".

Roads around Kersbrook were blocked off around the fire, while some not far from the area fled their homes because of embers.

A second out-of-control fire in Tantanoola, in South Australia's lower south-east, slowed with the help of water bombers, some called in from Victoria and New South Wales. 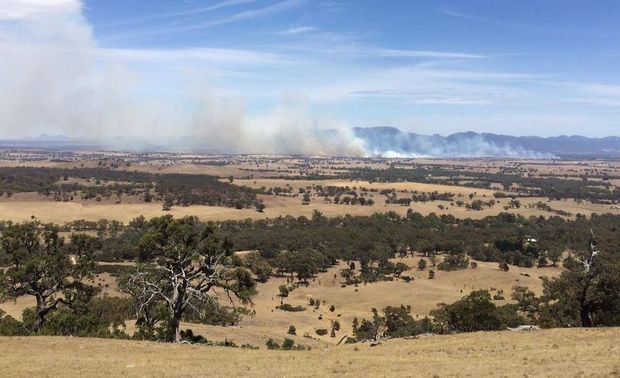 A grassfire outside the Victorian town of Moyston on 2 January 2015. Photo: AAP / CFA

In Victoria, Emergency Services Commissioner Craig Lapsley said it was extremely lucky that the fire went around the town of Moyston, near Ararat in the state's west.

"Firefighters have done a great job on the ground. In excess of 38degC, 41degC and out there doing it in windy conditions," he said.

"We also had significant aircraft over the fire, and it still ran hard, which is exactly what we thought it would do."

A severe weather warning has been issued, with wind gusts of up to 90 kilometres an hour expected to affect the South West, Central and West and South Gippsland forecast districts.

The BoM's Tony Leggett said the wind would be a major factor, combined with the extreme temperatures.

He also said there would not be much rain in the expected cool change late on Saturday.

"[The change is] a series of wind shifts which will keep winds in the 80 to 90, up to100kmh range throughout the afternoon on Saturday, which is very bad for fire spread," he said.

"Those conditions will extend into Victoria in the morning.

"So it's looking like a very grim 24 hours that we're facing."

Total fire bans were declared for eight of nine districts in Victoria last week, excluding East Gippsland, and on Saturday the entire state will be under a total fire ban.