Properties have been lost and 120 people have been evacuated as a large bushfire burns in the Australian state of Victoria. 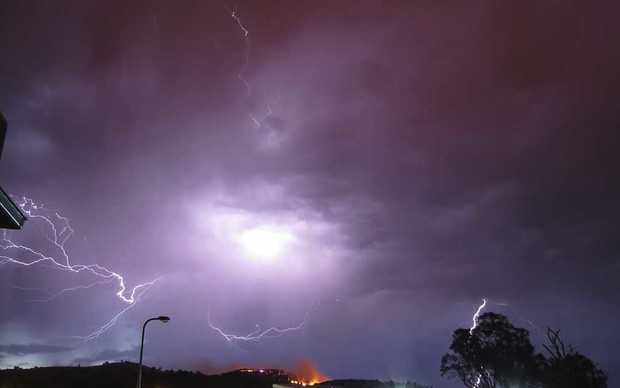 One home has been lost in the fire in the Longwood region, which flared this afternoon, and has so far burned up more than 6000 hectares of land.

Authorities said the evacuation was a precautionary measure.

The fire is one of four causing problems for firefighters and emergency officials across the state's northeast after lightning on Monday sparked 350 fires.

A winery in the Macedon Ranges has been damaged, properties have been destroyed and stock has been lost.

Fire Services Commissioner Craig Lapsley told the ABC that no lives had been lost, but one person was unaccounted for.

"We're just trying to connect now to where that person may be and that was a bit of a pressure point last night thinking that did we have someone that was injured or ultimately lost their lives," he said.

"We don't believe that is the case. We're just trying to track through now with police and local people to say that these people are connected and we know where they are."

Commissioner Lapsley said gale-force winds on Tuesday made it a difficult night for firefighters.

An emergency warning is in place at Boweya near Wangaratta where a bushfire is threatening homes and fire authorities say it is now too late for people to leave their homes.

The fire is burning in the Boweya and Killawarra forests near the Warby Ranges and is moving in an easterly direction.

"We don't yet know the total impact from these fires," CFA spokesman Greg Murphy said.

"We've got impact assessment teams working this morning to work through that to understand definitively what the impact has been."