Multinational teams searched on Monday for any sign of an AirAsia plane missing off Indonesia with 162 people on board, but one top official warned it was likely at the bottom of the sea. 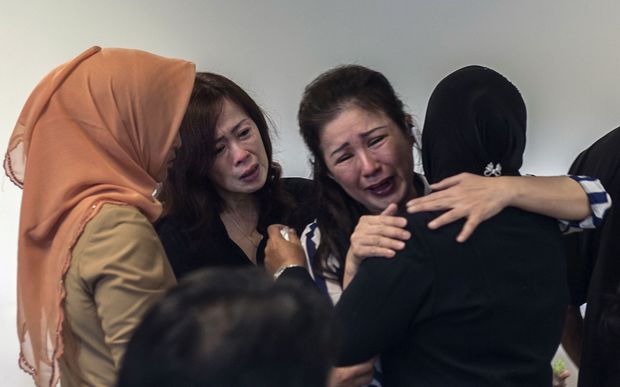 Australia, Singapore and Malaysia deployed planes and ships to assist in the Indonesian search as anguished relatives waited for news of their loved ones more than a day after Flight QZ8501 disappeared over the Java Sea.

The Airbus A320-200 lost contact en route from Surabaya in Indonesia's east Java to Singapore on Sunday after the crew requested a change of flight plan due to stormy weather, in the third crisis for a Malaysian carrier this year.

"Based on the coordinates given to us and evaluation that the estimated crash position is in the sea, the hypothesis is the plane is at the bottom of the sea," National Search and Rescue Agency chief Bambang Soelistyo told journalists.

"That's the preliminary suspicion and it can develop based on the evaluation of the result of our search," he said. 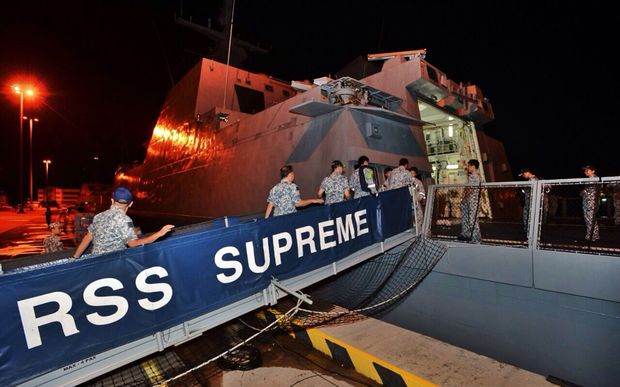 Currently search teams are scouring an area where the sea is 40-50 metres deep, he said, adding that Indonesia was coordinating with other countries to access any equipment needed to scour the seabed.

"Due to the lack of technology that we have, I have coordinated with our foreign minister so we will borrow from other countries which have offered. They are the UK, France and US," he said.

"It is not easy to look for something underwater... that will not break our spirit to continue searching, no way."

AFP reports distraught relatives spent the night in Surabaya hoping for news of loved ones as international teams expanded their search area.

Intan, 28, urged Indonesia to seek international help to find the plane which was carrying her brother and his family and friends.

"My hope is Indonesia seeks as much help as possible from other countries. Don't claim 'We have sophisticated technology', just ask other countries because they are better equipped," she told AFP.

"My prayer is I really, really hope that there will be news about the people on board. Whatever it is, what is important is we know where they are now," she said.

AirAsia said 155 of those on board flight QZ8501 were Indonesian, with three South Koreans and one person each from Singapore, Malaysia, Britain and France. The Frenchman was the co-pilot.

Air traffic controllers lost contact with the twin-engine aircraft around an hour after it left Surabaya's Juanda international airport at about 5:35am.

Shortly before the plane disappeared, the pilot asked to ascend by 6,000 feet to 38,000 feet to avoid heavy clouds but his request was turned down due to another flight above him.

The search is focused on waters around the islands of Bangka and Belitung in the Java Sea, across from Kalimantan on Borneo island.

Mr Soelistyo said the search area had been expanded northwards in the waters between Sumatra and Kalimantan.

"We added three sectors to the north of the (four) search areas we had yesterday," he said.

"We are looking around Bangka, Belitung islands, Singkep, Karimata Strait, as well as the land area west of West Kalimantan."

China, which had 152 citizens on Malaysia Airlines flight MH370 which is still missing, has also offered help with the search.

The aircraft was operated by AirAsia Indonesia, a unit of Malaysian-based AirAsia which dominates Southeast Asia's booming low-cost airline market.

AirAsia's flamboyant boss Tony Fernandes, a former record industry executive who acquired the then-failing airline in 2001, arrived in Surabaya, where most of the passengers are from.

"Obviously this is a massive shock to us and we are devastated by what has happened. It's unbelievable," he told a press conference.

"We don't want to speculate. We don't know what's happened yet so we'll wait for the accident investigation... Our concern right now is for the relatives and the next of kin."

Indonesia's President Joko Widodo said his nation was "praying for the safety" of those onboard.

But the air industry has been blighted by poor safety standards in an area that also experiences extreme weather.

Climbing to dodge large rain clouds is a standard procedure for aircraft in these conditions.

"What happens after that is a question mark," according to Indonesian-based aviation analyst Dudi Sudibyo.

The plane's disappearance comes at the end of a disastrous year for Malaysian aviation.

Malaysia Airlines Flight MH370 disappeared on a regular flight from Kuala Lumpur to Beijing in March with 239 passengers and crew, and in July, MH17 was shot down over troubled Ukraine killing all 298 on board.