Pakistan has announced it will execute another prisoner in the next few days, having lifted a moratorium on the death penalty in response to the school massacre in Peshawar on Tuesday. 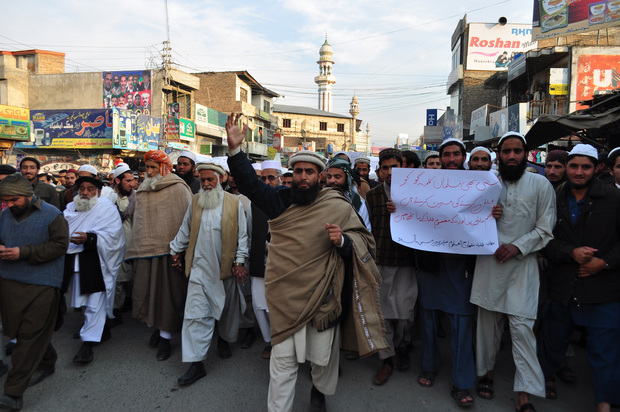 Pakistani Islamists march for the victims of the Peshawar school massacre at a protest in Mansahra. Photo: AFP

Two prisoners have already been executed.

One of those executed was convicted over an attack on Pakistan's Army HQ in 2009, the other over an assassination attempt on ex-leader Pervez Musharraf, the BBC reported.

"To its great credit, Pakistan has maintained a de facto moratorium on the death penalty since 2008," he said, adding that those at risk of imminent execution were unconnected to the "premeditated slaughter" in Peshawar.

"We urge the government not to succumb to widespread calls for revenge, not least because those at most risk of execution in the coming days are people convicted of different crimes."

"It is nothing that one can be proud of but the militancy and terrorism in Pakistan has convinced everyone in the country that the provision of our law, which envisions the sentencing to death of those engaged in heinous crime, needs to be carried out."

Some 141 people, all but nine of them children, died in the Taliban attack on the army-run public school in Peshawar.

Pakistan's military carried out operations against Taliban units in areas near the border with Afghanistan on Friday, local time, saying it had killed 59 militants.

It said soldiers were helping to keep prisons secure, to thwart any attempt by the Taliban to free their fellow militants after the announcement of further executions.

The Pakistani army chief has so far reportedly signed the death warrants of six terrorism convicts.