Candlelit vigils are taking place across Pakistan and the country is observing three days of national mourning following the Taliban attack on an army-run school in Peshawar.

More than 140 people, including 132 children, were killed when gunman wearing explosive vests stormed the school at 10am (local time) yesterday in the northwest. 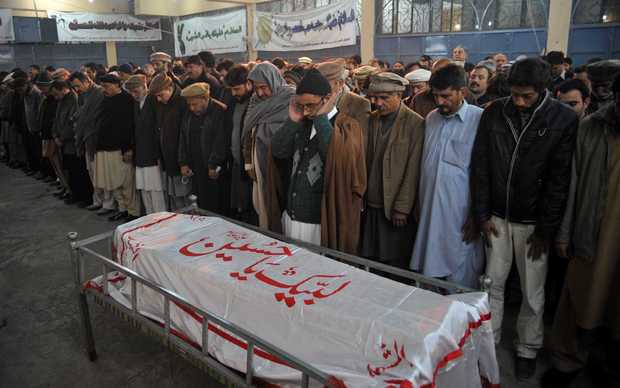 Pakistani mourners pray over the coffin of a student killed in the attack. Photo: AFP

Funerals are already being held and the Pakistan military has begun punitive action against Taliban extremists against their border region strongholds.

Chief of staff General Raheel Sharif said in a tweet that "massive air strikes" had been carried out in the Khyber region, a tribal region near Peshawar.

Meanwhile, the Afghan Taliban - who have close links to Pakistan's - criticised the school attack, saying the killing of innocent women and children is un-Islamic.

The Afghanis say they are sending their condolences to the families of the children who died, and President Ashraf Ghani called the attack inhuman. 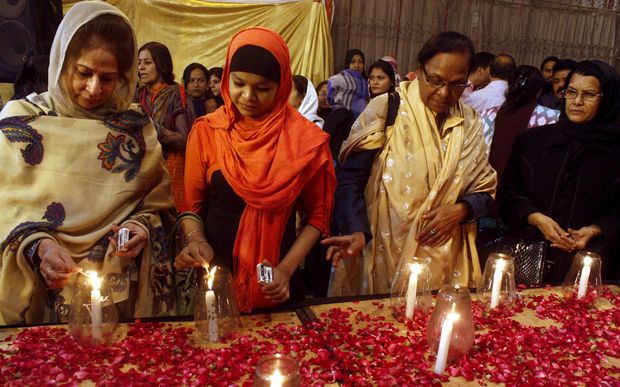 A candle-lit vigil was held in Karachi in memory of the victims. Photo: AFP

Many families have started burying the dead, in line with Islamic custom, and hospitals remain full with injured children.

Mourners crowded around coffins bedecked with flowers, while other families waited at hospitals for news, the BBC reports.

Mr Sharif is in Peshawar and has conveyed a meeting of parliamentary parties including the opposition to discuss how to respond to the attack. He said it was a national tragedy unleashed by savages.

Many questions are being asked about how the militants were able to get into the army-run facility and move about for so long without being challenged.

According to the army, yesterday's attack was carried out by seven Taliban attackers, all wearing bomb vests. They cut through a wire fence to enter the school from the rear and attacked an auditorium where children were taking an exam.

Gunmen then went from classroom to classroom at the school, shooting pupils and teachers where they found them, survivors say.

The siege at Peshawar's Army Public School, which teaches boys and girls from both military and civilian backgrounds, lasted eight hours. Hundreds of people were evacuated.

The Pakistani Taliban sought to justify the attack by saying it was revenge for the army's ongoing campaign against them. The school was chosen as a target, the militants said, because their families had also suffered heavy losses.