The Pakistani Taliban have expressed their support for Islamic State (IS) militants in Syria and Iraq. 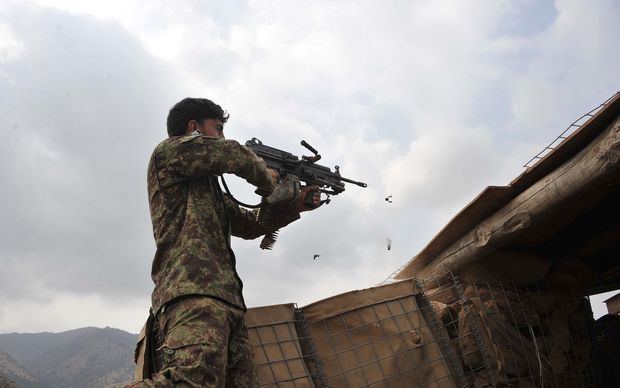 A member of Afghan security retaliates against Taliban insurgents during an operation in the Dur Baba district near the Pakistan-Afghanistan border last month. Photo: AFP

In a statement marking the Muslim festival of Eid, the group appealed to Islamists there to unite against the "enemy" - the US-led alliance.

IS has taken over large parts of Syria and Iraq, but has also been battling al-Qaeda-linked rival militant groups.

The Pakistani Taliban has been waging its own insurgency against the Islamabad government since 1997.

Saturday's statement was issued by the leader of Tehreek-e-Taliban Pakistan (TTP), Maulana Fazlullah, sent by his spokesman.

Addressing IS in Syria and Iraq, he said: "We are proud of your conquests against the enemies. We are with you in good and bad times."

"In these troubled days, we call on you to be patient and stay united as your enemies are now united against you. Forget rivalries."

The statement said the global Muslim community would "stand by you in these tough times and help with what we can".

The BBC reports there has been little evidence so far of an agreement between IS and the Pakistani Taliban.

But a BBC correspondent said recently supporters of IS had been spotted in the north-western Pakistani city of Peshawar distributing pamphlets praising the group.