The Sydney cafe siege has sparked a tide of support for Muslim Australians, with the #illridewithyou hashtag trending worldwide on Twitter. 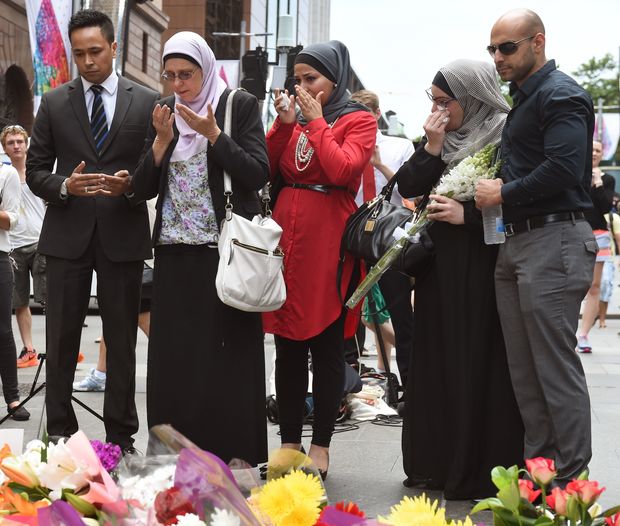 Representatives of the Muslim community pray after laying flowers at a floral memorial at the scene of the Sydney siege. Photo: AFP

The hashtag has been rising by hundreds of tweets per minute and within hours it had been used in almost 120,000 tweets, the ABC reported.

ABC Sydney had had calls from Muslim listeners who said they were too scared to ride on public transport following the siege by Iranian Man Haron Monis, which left him and two hostages dead and four others wounded.

The hashtag appears to have come from a Facebook post from Rachael Jacobs who was riding on a train and noticed a Muslim woman quietly take off her head covering.

In her post she said: "I ran after her at the train station. I said 'put it back on. I'll walk with u'."

Ms Jacobs said she had been overwhelmed by the response to her story.

This morning Ahmad Malas, 31, travelled with his sister Ezhidar, 29, to work on a Sydney train from Lakemba.

Ms Malas said while people's emotions were "up in the air" she was a "bit concerned about any sort of backlash which could happen, especially heading towards the city".

The pair said the siege was upsetting and offered prayers for the hostages and their families.

They welcomed the support being offered by the #illridewithyou initiative.

"It's very positive and just makes you feel you are not alone in this and shows you as well the wider community also appreciates what you are going through. So it's very good to feel you are a part of a wider family," Mr Malas said.

The hashtag has been picked up by a number of prominent tweeters, as well as throngs of everyday users, making it one of the most prominent topics on Twitter.