The Sydney siege is the kind of situation the Government had in mind when strengthening anti-terrorism law, according to Prime Minister John Key.

Parliament last week passed legalisation under urgency to strengthen this country's anti-terrorism laws. Labour supported the legislation, saying that it accepted there was an increased threat level.

Mr Key said the siege made it feel like terrorism was coming closer to home and was a tragedy for the families of the Australians and for New Zealand, which treats Australians as family.

While this was the work of a disturbed individual, Islamic State was also running an outreach campaign trying to tap into such people, he said.

"So if you look at the 30 to 40 individuals that we named in the national security speech I gave some time ago it's these kinds of people, and also their influence, if you like, which presents a risk.

"Now I don't want to overly concern or frighten people I mean we are taking all of the logical steps we can."

The Prime Minister said the holding up of an Islamic flag in the Lindt cafe in Sydney made it feel like ISIS (Islamic State) was the driving force behind what happened. 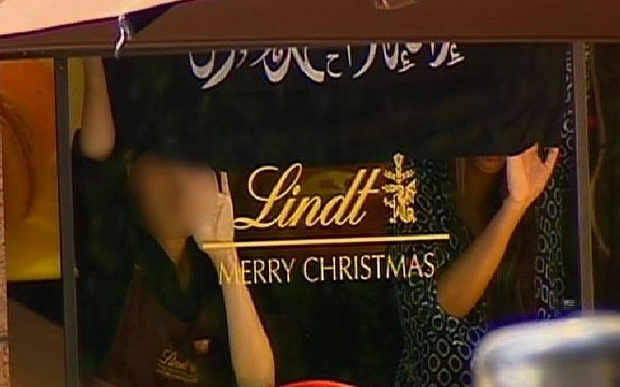 The Islamic flag in the window of the Lindt cafe during the crisis. Photo: Channel Seven

"John Key should listen to those who are in Australia at the moment, and the police commissioner has made the point that he believes these are the actions of one individual and that Australians need to continue to go about their daily lives.

"Clearly we do live in times of heightened threat particularly in Australia but also to some extent in New Zealand.

"What's not helpful is to conflate together the change in the laws in New Zealand with the actions of one individual."

Mr Key said he was confident New Zealand authorities were trained and prepared to respond should a similar incident happen here, but as far as he was aware this country's national security threat risk had not changed.

Green Party co-leader Russel Norman said it was unfortunate Mr Key was making political capital out of what was a tragedy.

"I think John Key and Tony Abbott both used the opportunity to try to make people feel frightened and then used that fear to push through their political agenda, which is more surveillance state and to restrict our civil liberties," he said.

"I think that's most unfortunate and I don't believe it's good political leadership."

A New Zealand Muslim leader said the Sydney crisis incident would harm the reputation of Muslims in New Zealand and Australia.

Anwar Ghani, president of the Federation of Islamic Associations, said images of the flag would have an impact on how Islamic people are perceived, though he did not expect a backlash against his community.

Dr Ghani told Morning Report the hostage-taking was a cowardly and heinous crime and he was praying for the people affected and their families.