Unmanned US spacecraft Orion has splashed down in the Pacific Ocean after its first four-hour test flight. 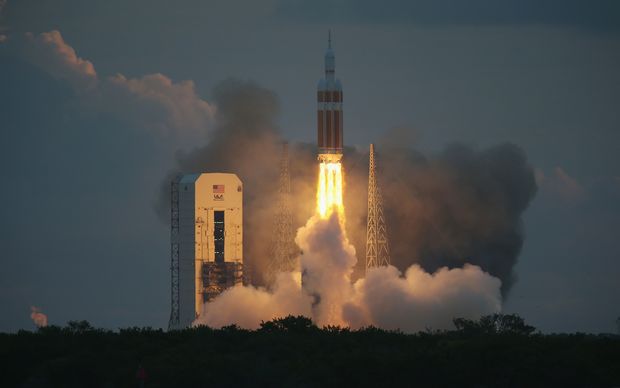 NASA's new crew capsule is designed to eventually take humans beyond the International Space Station to destinations such as the Moon and Mars.

Today's brief 4.5-hour maiden flight was intended to test critical technologies, like its heat shield, which has to survive enormous temperatures, and parachutes.

It splashed down roughly 1000 kilometres off the coast of Baja, California at 5.30am this morning.

Drone video sighted the spacecraft descending gently on its parachutes shortly before it hit the water, the BBC reported.

US Navy support vessels were on station to capture the floating capsule with the help of divers,

Commentators on NASA's television channel said the craft had made a "bulls-eye" splashdown.

Orion was launched on a Delta IV-Heavy rocket from Cape Canaveral in Florida at 07:05 local time (12:05 GMT).

The orange-coloured triple booster was quickly lost in cloud after clearing the pad but headed effortlessly east out over the Atlantic for a two-lap circuit of the Earth.

It was on the second of those two orbits that the Delta's upper-stage took Orion up to an altitude of 6000 kilometres, to set up a fast fall back to the planet.

The capsule was expected to reach speeds close to 30,000 kilometres per hour as it entered the atmosphere, with pressing air likely to generate temperatures of up to 2000 degrees Celsius.

This was one of the key aims of the mission - to see how Orion's thermal protection systems would perform, the BBC reported.

Engineers will know more when the capsule is recovered and returned to land for inspection.