British billionaire Sir Richard Branson has dismissed as "garbage" media reports that his Virgin Galactic company ignored safety warnings about a spacecraft that crashed - killing one pilot and seriously injuring another. 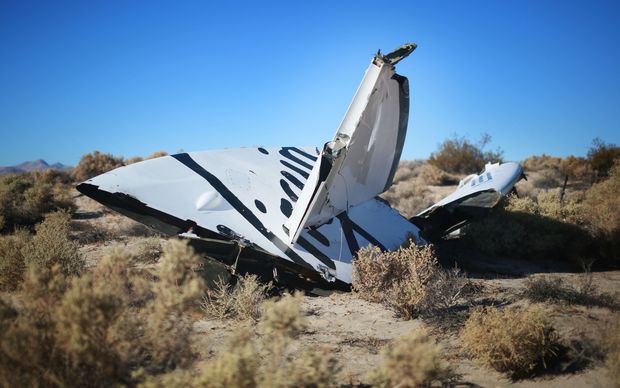 He said initial findings by crash investigators in the United States showed that there was no explosion, the BBC reported.

He criticised what he called "irresponsible innuendo" about the crash in a number of British newspapers.

"Rumours and innuendo from self-proclaimed experts can be put back in their box," he told the BBC.

Sir Richard said that he would not send tourists into space until he and his family members had made the trip. He described the accident as a "horrible setback".

Virgin Galactic had aimed to send tourists into space early next year, and has already taken more than 700 flight bookings at $US250,000 each.

Air safety chief Christopher Hart said the "feathering" device, designed to slow the craft on re-entry, activated without a command from the pilots.

But he said it was too soon to confirm any possible cause of the crash.

Media reports had focused on the fuel tanks and the engine, but Mr Hart said that both were found intact.

In normal flight, the feathering device was deployed when the ship has reached its highest altitude, after the spaceship has broken through the atmosphere.

The twin tailbooms on the craft are rotated 90 degrees, from the horizontal to the vertical. 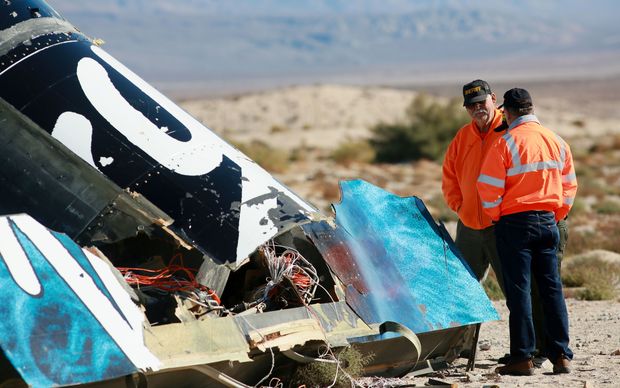 Sheriff's deputies inspect the wreckage of the Virgin Galactic SpaceShip 2 in a desert field north of Mojave, California. Photo: AFP

The effect was to make the returning spaceship behave much like a shuttlecock.

As the air gets thicker on the descent and rushes over the booms, the drag on the vehicle means it naturally adopts a belly-down position ready for the glide back home - just as the feathers always ensure forward-facing flight for the conical projectile used in a game of badminton.

Feathering gets around the need for a complicated system of small thrusters that would otherwise be required to put the rocket plane into the correct re-entry attitude.

The system worked to great effect on the prototype SpaceShipOne when it made its flights to suborbital space 10 years ago.

Editor of space.com Tariq Malik said the system needed to first be unlocked, and then deployed.

He said there was footage of one of the pilots unlocking the system, but not activating it.

Mr Malik said the question for investigators is how the deployment occurred.