The launch of NASA's deep-space Orion capsule for a test flight around Earth has been delayed after a last-minute technical problem with its rocket. 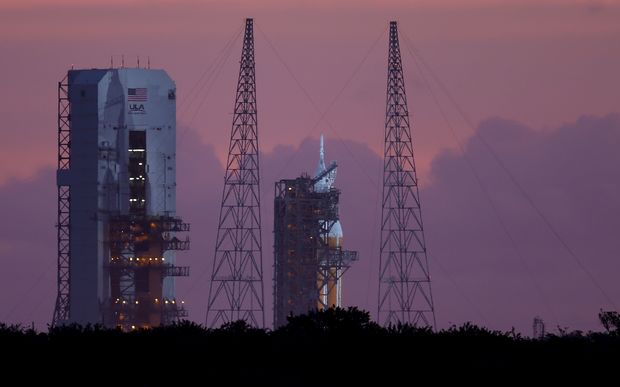 The rocket carrying NASA's Orion is seen on its launch pad before the morning's mission was scrubbed on 4 December. Photo: AFP

Orion is one day expected to carry humans to Mars but, for its orbital debut, will be flown without a crew.

The US space agency has spent more than $9 billion developing the capsule, which will make a second crewless test flight in about four years.

A third mission, expected around 2021, will include two astronauts on a flight that will send the capsule into a high orbit around the moon.

No time to troubleshoot

Orion's maiden voyage was due to take place from Cape Canaveral in Florida between 12:05 GMT and 14:44 GMT on Thursday, the BBC reported.

But the countdown was interrupted by a boat getting too close, by gusty winds and by troublesome propellant valves on the rocket.

"Despite the valiant attempts of the launch team and mission managers around the country, we basically ran out of time in trying to troubleshoot," NASA spokesperson Mike Curie said.

The conical vessel is reminiscent of the Apollo command ships that took men to the Moon in the 1960s and 1970s but bigger and with cutting-edge systems.

Lockheed Martin, the company developing Orion and running this test flight for NASA, has another three days to get the mission off the ground before negotiations must take place for an extension.

Other space missions have bookings on the launch complex and they would have to agree to step aside. Unfortunately, the weather looks to be deteriorating over the next 24 hours.

Orion is being developed alongside a powerful new rocket that will have its own debut in 2017 or 2018.

Together, they will form the core capabilities needed to send humans beyond the International Space Station to destinations such as Mars.

For the time being, the Delta IV-Heavy rocket - currently the beefiest launcher in the world - is being used as a stand-in, the BBC reported.

If all goes well tomorrow, the Delta will send Orion twice around the globe, throwing the ship up to an altitude of almost 6000 kilometres.

This will set up a fast fall back to Earth, with a re-entry speed into the atmosphere close to 30,000 kilometres per hour - near what would be expected of a capsule returning from the Moon.

It should give engineers the opportunity to check the performance of Orion's critical heat shield, which is likely to experience temperatures in excess of 2000 degrees Celsius.

They will also watch how the parachutes deploy as they lower the capsule into the water off Mexico's Baja California Peninsula.