White House officials say the 68-year-old submitted his resignation letter after lengthy discussions with the President Barack Obama that began in October. 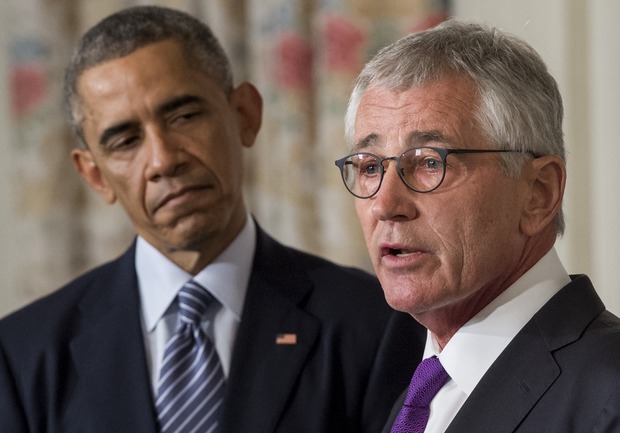 Mr Obama announced the resignation at a White House event with Mr Hagel at his side. The former Republican senator and Vietnam war veteran will continue as defence secretary until a replacement is found.

Mr Hagel was appointed less than two years ago as the US president pushed his signature programme of winding up wars in Afghanistan and Iraq, a process being changed this year with US re-engagement in Iraq and greater military cooperation with Kabul.

Mr Obama said at the White House event that Hagel had always been candid with his advice and had "always given it to me straight."

The defence secretary raised questions about Mr Obama's strategy toward Syria in a two-page internal policy memo that leaked last month. In it, he warned that Mr Obama's policy was in jeopardy due to its failure to clarify its intentions toward Syrian President Bashar al-Assad.

"What I can tell you is there are no policy differences in the background of this decision," a senior US defence official told Reuters. "The secretary is not resigning in protest and he's not being 'fired'," the official said.

Mr Hagel, who was the only enlisted combat veteran to serve as defence secretary, ran into a wave of opposition when Mr Obama, a Democrat, nominated him.

Republicans objected because Mr Hagel opposed the 2007 Iraq war 'surge' of troops, which eventually helped defeat al-Qaeda and other militants and opened the way for a US troop withdrawal.

He had also upset many in his party by endorsing Obama in his presidential race against Republican Senator John McCain in 2008.