US Defence Secretary Chuck Hagel says he has received guarantees from his Russian counterpart that no Russian military personnel are involved in a huge convoy of humanitarian aid approaching the Ukrainian border. 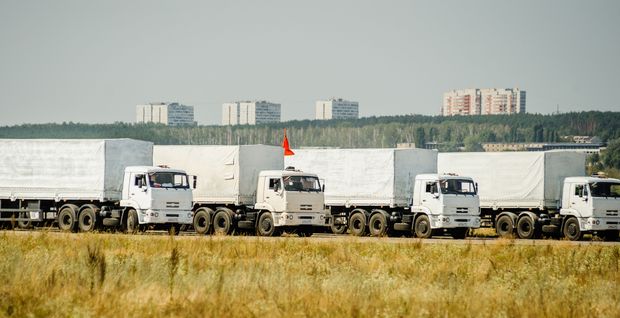 Russia has denied the aid convoy carries arms but Ukraine suspects it could be on the way to provide military help. Photo: AFP

Russia and Ukraine have been wrangling for days over the convoy, which Moscow says is carrying humanitarian aid for besieged rebel-held cities but which Kiev suspects could be on its way to provide military help.

Russia has denied the convoy covertly carries arms for pro-Russian rebels and has allowed journalists, including the BBC's Steve Rosenberg, to inspect some of the vehicles, which are stalled at the border.

"We were allowed to select any of the 280 lorries and check their contents to prove that this is a purely humanitarian mission," Mr Rosenberg said.

"The lorry I picked was packed with drinking water. Moscow and Kiev appear to have reached an agreement now on how the aid will be checked and then delivered. It's expected that Ukrainian officials will be allowed to inspect the cargo on Russian territory."

The White House has urged Moscow to stop what it calls extremely dangerous and provocative attempts to destabilise Ukraine, where tensions have soared again in the past 24 hours.

Ukraine said it had partially destroyed an armoured column that had crossed from Russia overnight on Thursday.

The alleged incursion was witnessed by two UK newspaper reporters.

Russia's defence ministry said the incursion reports were "some kind of fantasy".

It said: "There was no Russian military column that crossed the Russian-Ukrainian border either at night or during the day."