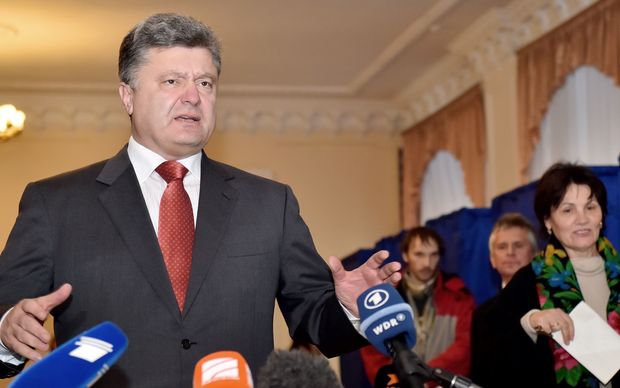 Mr Poroshenko said that talks might last up to 10 days and Prime Minister Arseniy Yatseniuk's People's Front party could be a key partner.

Pro-Western parties look set to dominate parliament after the first legislative polls since pro-Russian former president Viktor Yanukovych was driven from power in February this year, the BBC reports.

No votes were cast in two areas under control of pro-Russian separatists in the east of Ukraine, with 27 parliamentary seats there and in Crimea - annexed by Russia in March - remaining vacant. Preliminary official results are expected later today.

Meanwhile, heavy shelling has rocked the outskirts of the pro-Russian rebel stronghold of Donetsk in eastern Ukraine today. Powerful firing has been heard from high-calibre guns and there have been explosions.

Exit polls indicated that President Poroshenko's bloc - comprising his own Solidarity Party and Udar, led by former boxer champion Vitali Klitschko - was in the lead with about 23 percent of the vote.

"More than three-quarters of voters who took part in the polls gave strong and irreversible backing to Ukraine's path to Europe," Mr Poroshenko said in televised comments.

In order not to lose time, he said that coalition consultations should start this week.

"We have these 10 days when we must create... the best government in Ukraine because no other government will cope with the challenges that the country is facing today," he added.

At least 3700 people have been killed since an insurgency in the east of Ukraine began earlier this year. 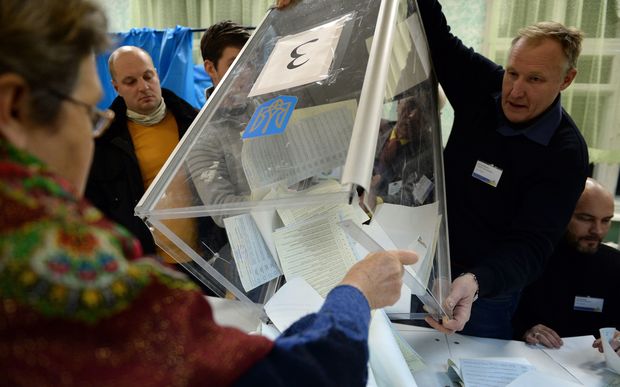 Members of a local electoral commission count ballots at a polling station in Kiev. Photo: AFP

Correspondents say that the top three performing blocs, including those of Mr Poroshenko's and Mr Yatseniuk, are strongly pro-European and are likely to give the president a strong mandate to pursue democratic reforms and pursue efforts to end the conflict in the east.

The exit polls suggested Mr Yatseniuk's People's Front would come second, with around 21% of the vote, and the Self Help Party, based in western Ukraine, third with more than 13%.

Parties linked to the government of former President Yanukovych or with close ties to Russia were set to receive fewer votes, the polls indicated.

The Opposition Bloc, formed by allies of ousted Pro-Russia President Viktor Yanukovych, was fourth with 8%, while the pro-Russian Communist Party might be without representation in parliament for the first time. However, the exit polls only take into account voting for 225 of the 450 seats.

Some 3 million people in separatist-controlled areas in Donetsk and Luhansk were unable to vote. Leaders there say they will hold their own polls in the next month.

Turnout reached more than 52.4 percent, according to official figures, however the turnout varied widely between the east and west of the country.

The highest percentage turnout was in the western Lviv region (about 70 percent), with the lowest in areas of Donetsk region under government control (about 30 percent).

International observers, meanwhile, expressed "serious concerns" over the effect the violence in the east of the country had on the election, with violence against candidates.

Mr Yanukovych fled in February after a wave of pro-Western protests in Kiev triggered by his refusal to sign a partnership agreement with the European Union.

Anger in eastern Ukraine at his overthrow turned to unrest with separatists seizing government buildings and beginning an insurgency in April.

The election comes amid an energy crisis, with Russia cutting off gas supplies to Ukraine in June in a dispute over unpaid bills.

Ukraine's economy is also collapsing, with GDP forecast to fall between 7 percent and 10 percent this year.