Ukraine's government and pro-Russia rebels have agreed a memorandum on a peace plan for the eastern conflict.

The nine-point deal includes setting up a 30km buffer zone, a ban on overflights of part of eastern Ukraine by military aircraft and the withdrawal of "foreign mercenaries" on both sides, the BBC reports.

The agreement was announced at talks in the Belarusian capital Minsk, where a ceasefire was agreed on 5 September. Although it has been frequently violated, the ceasefire is still holding.

The deal was reached after late-night talks between representatives of Ukraine, Russia, eastern separatists and the Organisation for Security and Cooperation in Europe (OSCE). 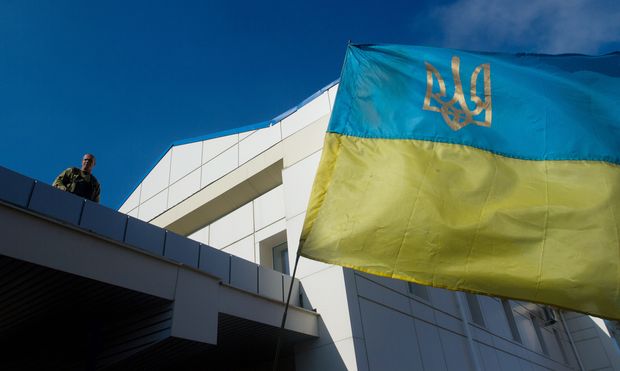 A pro-Ukraine soldier stands near the Ukrainian flag in Lugansk region. Photo: AFP

More than 3,000 people have died in fighting in two eastern regions since April.

Ukraine accuses Russia of arming separatists and sending its troops to the eastern Donetsk and Luhansk regions. The Kremlin denies it has any role there.

In a separate development on Saturday, three powerful blasts rocked the main rebel-held city of Donetsk, with eyewitnesses saying that a chemical plant may have been hit.

Meanwhile, a humanitarian convoy of about 200 lorries from Russia arrived in the city. Video appeared to show what Russia said was an aid convoy arriving in Donetsk.

Russia says the convoy - Russia's third in recent weeks - delivered food, water and generators, but this was done without Ukraine's authorisation.

Nato says ceasefire in name only

Nato's most senior military commander, General Philip Breedlove, has said the ceasefire between Ukraine and pro-Russian separatists currently exists 'in name only'.

He said the numbers of artillery rounds fired recently was comparable to periods before the truce came into effect.

He added, however, that he was "hopeful" about the new agreement.