A tip-off from America's Federal Bureau of Investigation (FBI) led to today's arrest of a Melbourne man who has now been charged with making funds available to a terrorist organisation, the Australian police say. 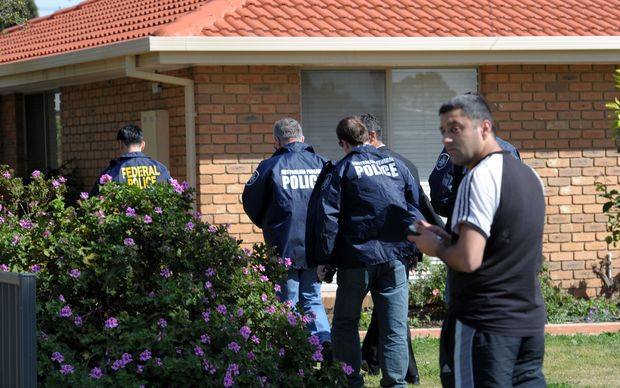 Federal police at a house in the Melbourne suburb of Seabrook. Photo: AAP

The 23-year-old man from the suburb of Seabrook allegedly provided $12,000 to an American citizen fighting in Syria, and was about to send more, the ABC reports.

The police said says that information from the FBI triggered an eight month investigation.

More than 100 Victorian and Australian Federal Police spent the morning raiding properties in Seabrook, Kealba, Meadow Heights, Broadmeadows and Flemington as part of a joint counter-terrorism operation, but say it is not in response to any threat to public safety, the ABC reports.

Mr Gaughan said they had acted because there was concern the man was about to make another transaction to the man in Syria.

Police said they believed the man was acting alone and did not intend to carry out a terrorist attack on Australian soil.

The raids came less than three weeks after Australia's terrorism alert level was raised to high, meaning an attack is likely, though authorities said they did not know of a specific threat.