Ukrainian government troops say they have repelled an attack by pro-Russian rebels on Donetsk airport. 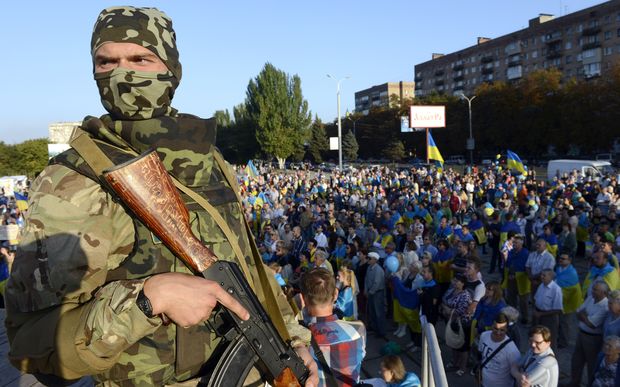 A Ukrainian serviceman guards a rally in the southern Ukrainian city of Mariupol. Photo: AFP

Gunfire was heard from the area, controlled by government forces despite rebel victories in the rest of the eastern city, yesterday.

Correspondents said the fresh violence is a big challenge to a fragile ceasefire agreed on 5 September, the BBC reported.

He said Ukraine was "in a stage of war", with the "key aggressor" being Russia.

Mr Yatsenyuk said the goal of Russian President Vladimir Putin "is to take the entire Ukraine", adding that Nato was the "only vehicle" that could protect his country.

Ukraine and Western countries accused Russia of intervening on the side of pro-Russian rebels in eastern Ukraine. Russia denied this.

Russia, he said, wanted Ukraine to be a "prosperous, neutral and friendly country".

And he accused the US of "trying to use the crisis in Ukraine to break economic ties between the EU and Russia and force Europe to buy US gas at much higher prices".