An official who heard a call between US President Donald Trump and Ukraine's president says he was concerned by Mr Trump's "demand" to scrutinise a rival. 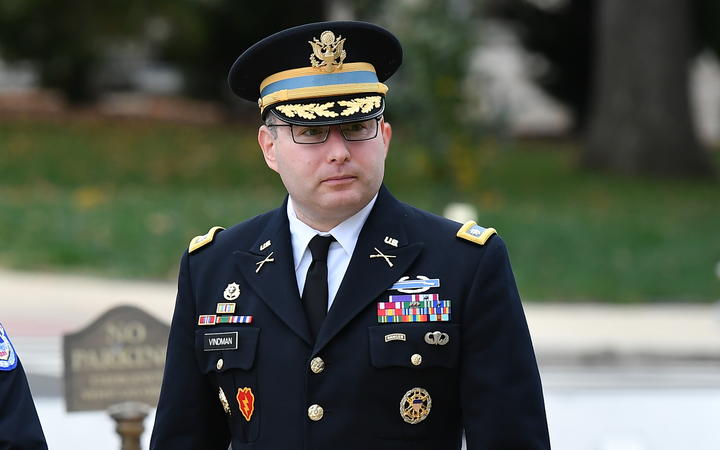 Colonel Vindman is the first White House official who heard the call to testify as part of the impeachment inquiry.

The inquiry concerns alleged abuse of power by the Republican president.

Mr Vindman, a decorated army veteran, was among select officials who were authorised to listen in on Mr Trump's 25 July call with newly elected Ukrainian President Volodymyr Zelensky, which sparked a whistleblower complaint and led to the impeachment probe.

Mr Trump is accused of trying to pressure Ukraine into investigating unsubstantiated corruption claims against Mr Biden and his son, who worked with Ukrainian gas company Burisma while his father was the US vice-president.

Mr Trump has denied wrongdoing and called the impeachment inquiry a "witch hunt".

Though the White House has called on witnesses to disregard congressional subpoenas, as an active-duty military officer, Mr Vindman could have faced sanction for doing so.

What did Mr Vindman say?

In an opening statement released ahead of Tuesday's testimony, Mr Vindman said his worries began at a 10 July meeting between US and Ukrainian national security officials. 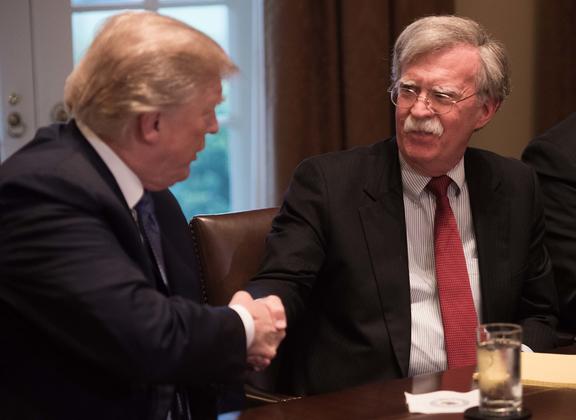 "The meeting proceeded well until the Ukrainians broached the subject of a meeting between the two presidents," Mr Vindman said, noting that Ukraine saw this as "critically important" for maintaining US support.

US Ambassador Gordon Sondland then brought up "Ukraine delivering specific investigations in order to secure the meeting with the president" which alarmed Mr Bolton and Mr Vindman.

At a debriefing afterwards, Mr Vindman said the ambassador again "emphasised the importance that Ukraine deliver the investigations into the 2016 election, the Bidens and Burisma".

"I stated to Amb Sondland that his statements were inappropriate, that the request to investigate Biden and his son had nothing to do with national security."

Following this incident, Mr Vindman reported his concerns to the National Security Council's lead counsel. He reported his objections again after the 25 July call.

"I did not think it was proper to demand that a foreign government investigate a US citizen," Mr Vindman says in the statement. "I was worried about the implications for the US government's support of Ukraine."

He said having that country look into the Bidens would "undoubtedly result in Ukraine losing the bipartisan support it has thus far maintained".

"This would all undermine US national security," he added.

What's the latest on the impeachment inquiry?

Just hours after Mr Vindman gave evidence, Democrats in the US House of Representatives published a resolution that sets out the next steps in their investigation.

The House, where the Democrats are in a majority, will vote on the measure on Thursday.

It sets out a formal structure for the congressional committees' inquiry into whether there are grounds to remove President Trump from office.

Responding to the resolution, the White House press secretary Stephanie Grisham called it an "illegitimate sham".

As the testimony was due to begin, Mr Trump suggested Mr Vindman was a "Never Trumper witness" in a tweet.

Supposedly, according to the Corrupt Media, the Ukraine call “concerned” today’s Never Trumper witness. Was he on the same call that I was? Can’t be possible! Please ask him to read the Transcript of the call. Witch Hunt!

Other conservatives have also attacked Mr Vindman's credibility because he was born in Ukraine - though some have since defended the veteran officer.

Republican congresswoman Liz Cheney denounced these gibes as "shameful" at a news conference with other House Republican leaders.

"Nothing in that phone call is impeachable," he said.

Who is Alexander Vindman?

In 2018, Mr Vindman joined the security council under former National Security Adviser John Bolton, who was fired by Mr Trump earlier this year.

His family fled the Soviet Union in 1979, when he was three years old. He has served in the military for two decades as an active officer and diplomat.

As an infantry officer, he was deployed to Iraq - where he was wounded and received the Purple Heart military award.

Mr Vindman later served at US embassies in Ukraine and Russia.