The anticipated re-election of Japan's government is not expected to make it any easier to conclude a Pacific-wide trade deal.

Japan's Prime Minister Shinzo Abe was elected in 2012 vowing to kickstart the country's ailing economy by ending deflation and overthrowing vested interests that have stifled growth. 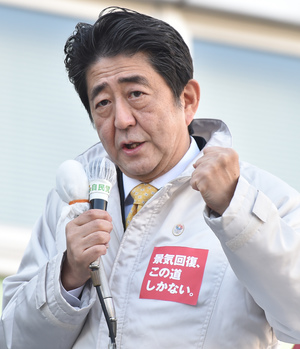 Yet two years later, he has called another election amid general disgruntlement among the population. Japan is again in recession and households are no better off.

A director of the APEC Study Centre at Auckland University, Robert Scollay, said Mr Abe had failed to deliver on his promises.

"He's shied away from structural reform which most commentators regard as the most crucial element and is also the element that would push him to make a progressive approach to the TPP."

But polls indicate Mr Abe should retain his job, helped by the fact that his political opponents are weak.

Professor Scollay said Mr Abe would get the chance to push through the changes to make Japan more competitive, including opening up its economy.

But he said many in Mr Abe's LDP party may prove difficult to convince.

"We'll just have to wait and see whether he will actually use the power that he's apparently going to get from his election win to actually push through on these domestic economic reforms which will imply a positive approach by Japan to the TPP," said Professor Scollay.

But Mr Petersen is under no illusion about the difficulty in successfully concluding the talks.

He said securing meaningful access for products like dairy products still would not be easy, in Japan and in other countries like Canada and the United States.

"Dairy is the one that's the most difficult to resolve. I'm pretty confident we can get good outcomes right across most of the sensitive areas. But dairy's a tough one ... it's tough politically," said Mr Petersen.

Mr Jacobi said US President Barack Obama did not yet have the so-called fast-track authority from Congress, which stopped US lawmakers from tinkering with the deal.

He was confident the new Republican Congress would grant Mr Obama the authority, which should help America's bilateral talks with Japan.

"Once that is secured, then it'll be harder for the Japanese stay on the sidelines," he said.

TPP talks resumed this week, with negotiators meeting in Washington, but no major breakthroughs are expected given this weekend's elections in Japan.

Last month, New Zealand's Prime Minister, John Key, warned the pact could be put on ice if no deal is done by the middle of next year.

Mr Jacobi warned time was not on the side of the TPP countries.

"The longer it takes, the harder it gets to convince the business community to continue to support it and the more emboldened the opposition to TPP becomes," he said.

And TPP opponents are certainly making their presence felt.

Unions, environmentalists and others descended on Washington yesterday to protest against the talks, reiterating their claims the TPP will harm workers and place corporate interests above those of consumers.