Changing people's perspectives on getting vaccinated could be as simple as the words used, reckons Pere Wihongi, one of those behind a new rangatahi-focused campaign. 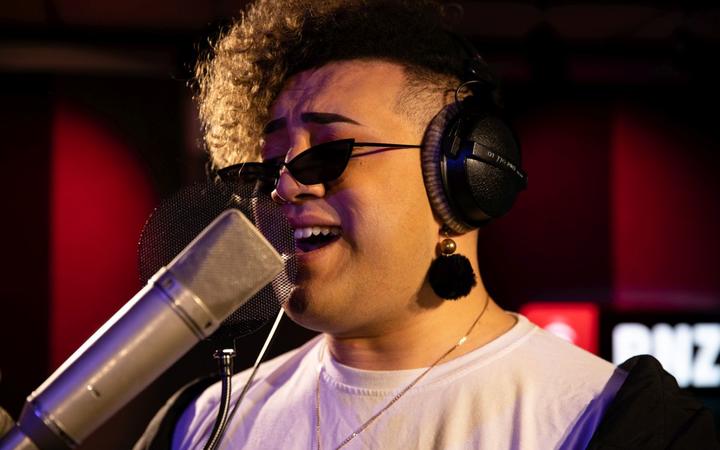 Māori musician Pere Wihongi has worked together with other rangatahi to create the 'Got Ya Dot', or Ira Dot, campaign. Photo: RNZ / Dan Cook

Why not use "dot" instead of shot or jab, he asked. And that is what he has gone and done.

The Māori musician has worked together with other rangatahi to create the 'Got Ya Dot', or Ira Dot, campaign to get more young people, as he says, "dotted."

Ira Dot messaging has been spotted on the social media profiles of well known New Zealanders in the past few weeks, with little context or explanation.

It was a campaign that mysteriously trickled across social media, until an explanation finally came this week.

Wihongi said that was by design. He wanted people to get intrigued, to try and find out what was going on.

"It's day 20 of the first concept we released and every day since then it has changed drastically," ," Wihongi said.

"To be very honest with you, it started off as a very materialistic thing. We wanted to do merchadise that would represent the dot, so we made shirts for people to start wearing. We also wanted people to put a dot on their sleeve, or a band, or a badge just something to show their support of the dot campaign," he said.

"Then after that it grew into how we could replace terminilogy being used with 'dot' to ease the conversation and to change persepctive towards the experience.

"Ira dot is about trying to get rid of the 'v' and 'j' words, because they come with stigmas and traumatic experiences behind them. So we know these words have an effect subconciously.

"So this is about taking back the narrative and creating a word that we know will be comfortable with our communities and whānau.

"The topic of vaccinations is quite triggering to people. You bring up the topic and our whānau either get really passionate, really defensive or completely switch off.

"So it was about thinking of the dialogue we are using to engage with whānau and using the word dot can change the perspective of Māori and the general public to this experience."

Wihongi said rangatahi Māori have been left until last in the vaccination rollout.

"It's quite evident. We have heard it amongst dicussions with other youth, and Māori health providers who have all agreed that youth voice, ideas and let alone Māori ideas weren't included from the get go.

"So what we are having to do now is actually pick up the pieces and firgure out how we can get people dotted."

"This kaupapa is a tangible way to demonstrate 'mahi tahi' by working together in our united approach, goes straight to the heart of what matters most, being able to connect with one another again.

"This campaign calls out to the rangatahi of Tāmaki Makaurau and their whānau.

"On 6-7 November, we welcome them to Eden Park and the supporting Kura Tuarua hubs to get dotted. We are all doing our bit to get Tāmaki Makaurau to connect with one another again. I know this event will help get us there faster."

More hubs will be set up in the future and details will be shared on the group's social media accounts.

There is no specific target for this weekend's event, but Wihongi hopes to get as many first doses given out as possible and to create a space for rangatahi, with prizes and koha to give away.