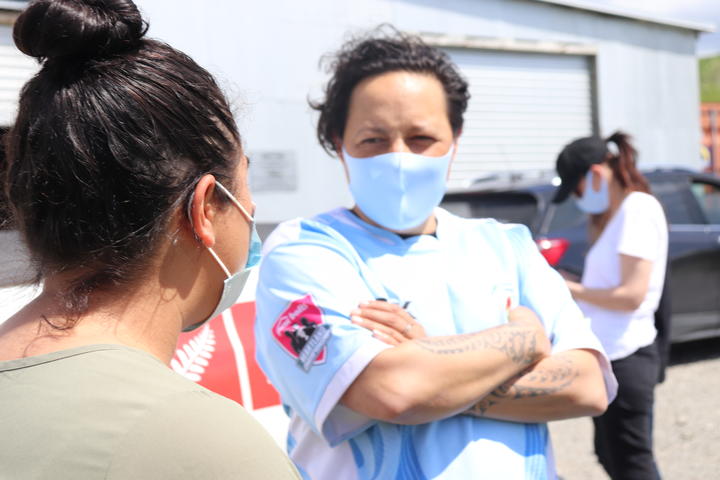 East Coast MP Kiri Allan visits some of the communities in her electorate to discuss the vaccination rollout Photo: RNZ / Tom Kitchin

The rate of Māori vaccination stays stubbornly low as the government pours tens of millions of dollars into efforts to speed it up.

Maps and graphs divided by ethnicity show Māori rates lagging. As of late last week the DHB with the highest double-jab rate among Māori was Auckland at just 63 percent compared to the overall rate of 82 percent. Taranaki and the Bay of Plenty both hit just 43 percent for Māori (compared to 63 and 65 percent respectively).

But within that data are pockets where vaccination numbers are pushing towards 100 percent.

Letters to the editor writers and keyboard warriors blame "lazy" and "stupid" Māori for poor turnout to vaccination centres. More reasoned explanations have pointed to lack of access and opportunity.

"Where we're at is not looking promising," says Jamie Tahana, Māori news journalist at RNZ.

"As the Delta outbreak spreads further more than half of each day's cases are Māori people and we make up 16 percent of the population. So it is fast becoming an outbreak among Māori, and vaccination rates are far behind.

“These two facts laid side by side .. it’s very worrying right now."

Today The Detail talks to Tahana about the myriad of reasons behind the low Māori uptake and how $120 million will be spent on driving the rates higher.

We also look at two Māori communities in the same DHB - Bay of Plenty - with two very different vaccination stories.

It’s difficult to get comparative numbers but a rural GP practice in Te Kaha on the East Coast has been steaming ahead - it is more than 80 percent fully vaccinated for its Te Whānau ā Apanui rohe.

On the other hand the Kawerau District Council says as of 24 October the general vaccination rate was 47.2 percent fully vaccinated – about half that of Te Whānau ā Apanui which is just two hours’ drive away. They expect by 6 November they should be at 65 percent fully vaxxed.

Senior lecturer at Otago University and a member of the local hapū Te Pahipoto, Morgan Godfery, tells The Detail there are big differences between Te Whānau ā Apanui and Kawerau.

"So you get to a problem where the iwi members who are helping to run the vaccination programme in Kawerau are not actually connected to the majority of Maori who live there."

Godfery says it is one of the many barriers to the vaccination rollout.

Godfery tells Sharon Brettkelly today what it was like growing up in the mill town, and how its history has contributed to today’s resistance.

He believes the $120 million for boosting Māori vaccination rates will help, enabling people to get to those who are more hesitant.