Protesters chanting and holding signs were outside Auckland Council today calling for the council to revoke a resource consent for a marina on Waiheke Island. 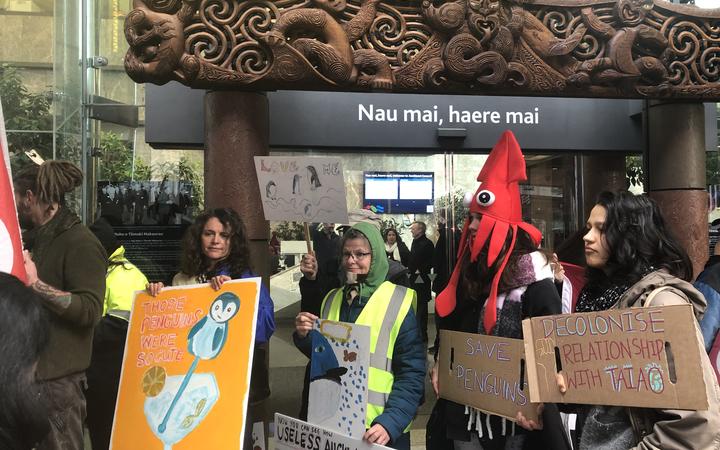 The Protect Pūtiki group are protesting against the development which has seen violent clashes between occupiers and security personnel.

But the Council has made it clear that it can't do anything.

Mayor Phil Goff refused to meet with the group and hear their concerns as they arrived this morning.

In a statement, the mayor said the council had no legal authority to withdraw the consent given that it has reached four levels of the court system.

"The consent has gone to four levels of the court system up to and including the Supreme Court. Like everybody else, the council must operate under the law."

"The Protect Pūtiki group is asking the council to withdraw a resource consent, something that the council has no legal authority to do," the Mayor said.

But tangata whenua, conservationists and supporters at the demonstration today have spent four months at the Kennedy Point marina site on Waiheke island, fighting to save the prestine area of Pūtiki Bay from a developement the size of eight football fields.

Those opposing say it endangers the native species of little blue penguins or kororā at the site.

The Ngāti Pāoa Trust Board have also been in the environment court fighting the private 186 berth marina but have shared their dismay with some of the tactics of the protest group. 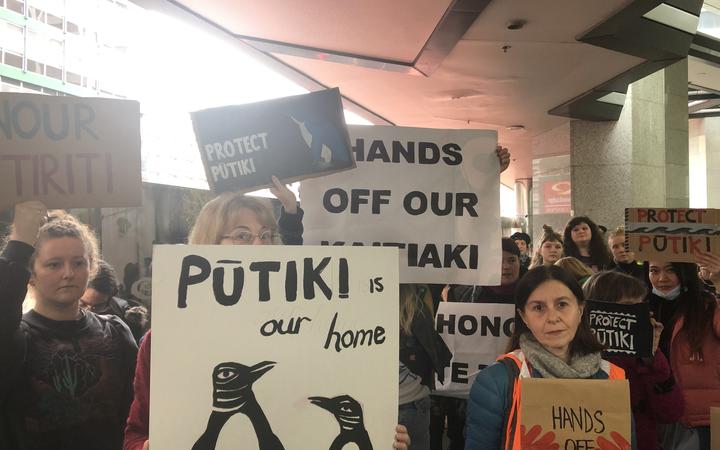 Emily Maia Weiss has been leading Protect Pūtiki and told the crowd privatisation of Pūtiki Bay was stealing from the community and iwi.

"To have Auckland Council consent to this bay to be privatised is a huge insult to tangata whenua, the natural environment, and to our matauranga"

"If this marina was to be put there, we lose that connection and the ability to tell that story in that space."

The resource consent was granted for the Kennedy Point Marina in 2017.

She said, since then, many parties have tried to stop the developement going ahead - including the iwi and environmental groups.

"We have stood up and fought for this for years now, yet the courts have still recognised the right for a resource consent to be there, but that doesn't mean that its right"

Bianca Ranson, an environmentalist from Mauri o te Moana - a group researching the health and well-being of the ocean - was at the demonstration to support.

She said the construction site and works were not being done in best practice for the welfare of the penguin species and the ocean.

"What we are asking is that Auckland Council is held accountable, the Department of Conservation is held accountable for their failing actions to protect our bay, our taonga species and the mauri of a moana that is on the brink of ecological collapse" she said.

Mayor Goff said the development will go ahead and the Council's priority now is to ensure the consent conditions-including the revised Kororā/Little Penguin Monitoring & Management Plan are complied with to protect the health and wellbeing of the kororā at the site.

With no resolution in sight, the protest group is expected to continue to campaign and delay construction works and a march to Parliament is planned for the forthcoming future.