Protesters and supporters on Waiheke Island from the group 'protect pūtiki' are still at the site of the controversial Kennedy Point Marina following the removal and arrest of three people who were occupying the construction zone. 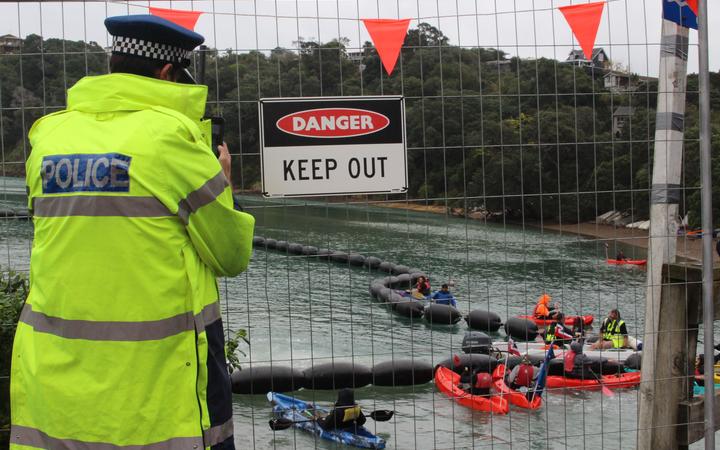 The Protect Pūtiki group have been protesting against the development for 129 days which has seen violent clashes between occupiers and security personnel.

Police arrived at the site of the proposed Kennedy Point Marina early this morning and removed the makeshift camp site where protesters had been.

Three protesters from the Kennedy Point development on Waiheke Island and one lone protester who remained have since left the construction zone, been arrested and taken to the Mount Eden custody unit.

Police said there have been ongoing issues between developers and protesters at the site for an extended period of time.

"Earlier this morning, Police arrested and removed three people that were trespassing on a pontoon inside the construction zone.

"Police remain present at the site and we are monitoring the situation," the statement said.

Police said their focus was on ensuring the safety of all parties, from protesters on site, to construction workers and the wider public.

One protester who is at the site, Naawie Tutgoro, said she was feeling intimidated and angered by the increased police presence since this morning.

"We are out here protecting our taonga, our whenua and moana, we are traumatised by what has happened.

"We as peaceful community members, as kaitiaki, as protectors have been forced into this self fulfilling prophecy by the police state, by colonial capitalism and systematic racism," she said.

Ngāti Pāoa Trust Board co-chairperson Danella Roebeck said the trust board was continuing their fight to protect the native kororā species on Waiheke Island in the Environment Court.

"We will continue to fight against the deficient kororā penguin management plan that has been presented by the developer Kennedy Point Boatharbour Limited."

The Ngāti Pāoa Trust board said the consultation process carried out by the developer and Auckland Council for the marina development was inadequate.

The trust board said it has filed a memorandum today in efforts to further ensure there are more stringent precautions in place to protect the kororā species which occupies the area where it is proposed the development be built.

The developer Kennedy Point Boatharbour Limited said the company was pleased that police had responded to "the untenable situation" and supports their objective of ensuring that the site is made safe for all.

"The heightened police presence and activity on site today is clearly a direct consequence of the protesters' illegal actions in recent days.

"The police on the ground are doing the job that the New Zealand public expects of them in these challenging 'stand-off' situations, and they are to be supported in what can only be a difficult and traumatic job," they said.

The company said works on-site will recommence once it is considered safe to resume.