A video of an incident at the controversial marina development on Waiheke Island appears to show a protester being kicked in the face.

Warning: Video images in this story may be distressing to some viewers 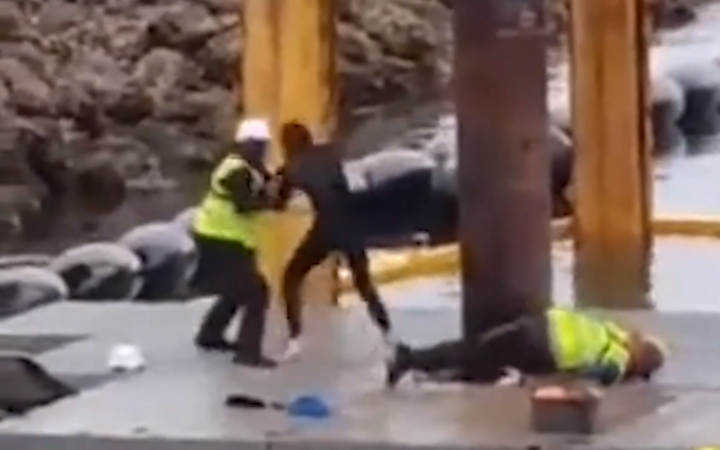 Protect Pūtiki has been occupying the site for 120 days, which they say endangers a nearby kororā (little blue penguin) colony. The developer rejects those claims.

Recent clashes between protesters and security guards for the development by Kennedy Point Boat Harbour Ltd have triggered police investigations.

In a video posted to Facebook, a protester on a pontoon is manhandled into the water by a man wearing a high-vis jacket.

While the protester is in the water, the man takes a step and kicks the person in the water in the head.

One protester, who spoke to RNZ at the development site today, said the behaviour was dangerous.

"I mean when you boot someone in the head that's not reasonable force.

"When you use a hook and a paddle on people, that's not reasonable force."

Tensions have escalated at the Pūtiki Point site in apparent scuffles between occupiers and people in hard hats and high-vis jackets.

It comes after a previous incident filmed last week, where people in hard hats and high-vis jackets rammed a boat into protesters who were sandwiched between large black buoys surrounding the construction zone, which left one with neck, chest and wrist injuries.

Another protester at the site today told RNZ it had been a stressful time amid escalating tensions.

"Just constantly people being in the water and trying to withstand all of the aggression."

A statement from the marina developers said the showed a small segment of a confrontation between protesters and security personnel.

"It is not an accurate representation of the full incident."

It claimed the protest was no longer peaceful and had to stop before someone was seriously hurt.

"The construction crew and site security staff are simply trying to do their jobs to protect the construction area from trespassers in line with a legal consent to build. They have a right to go to work without being verbally or physically abused.

"Protesters are choosing to ignore the clearly marked construction zone and trespass into an area where there are multiple dangerous hazards and construction works are taking place, putting their lives and the lives of others in danger in an effort to frustrate construction work."

The company said it was meeting with its security consultant and its staff and would thoroughly investigate the incidents.

Asked if security had used reasonable force, the developer's statement said: "It is important to remember that the company holds a lawfully granted resource consent to build the marina in this location and is entitled to trespass people entering its clearly marked, active construction zone, and this extends to using reasonable force if necessary.

"Whether the force used in this instance was reasonable will be a matter for the police to investigate if they receive a complaint from the person involved."

The developers did not condone unprovoked or unreasonable use of force by anyone.

"A number of complaints have been received," Davey said in a statement.

"Police will be investigating all allegations relating to criminal offending and this will take some time to complete.

"Police are currently speaking with both parties to try and come to a resolution."

Yesterday, Davey said some of those at the site had trespassed into the construction zone.

"We note that a number of security staff on site were assaulted whilst exercising their legal right to prevent trespass from occurring," Davey said in a statement.

"Local police staff attended after this incident occurred, however, due to the location of protesters it was deemed unsafe to remove them today. While police recognise the public's right to protest peacefully and lawfully, we are disappointed in the behaviour displayed today.

"Police will be following this matter up and will be laying charges against protesters that have committed criminal offences."

Ngāti Paoa Trust Board is taking the developer to the Environment Court today, claiming they breached their resource consent conditions by removing rocks from a wall.

The court was told recent surveys have identified 34 kororā nests along the rock wall.

The Department of Conservation (DOC) says construction work at Kennedy Point marina was not posing a direct threat to kororā.

DOC Auckland operations manager Kat Lane said kororā were most vulnerable when they started breeding and moulting, normally in August.

But she said there was no further work due to take place on the breakwater in the coming weeks or months.

Lane said the developer had filed a penguin protection plan under the Wildlife Act, but DOC had yet to make a decision on it.