Warning: Video images in this story may be distressing to some viewers

The developer of a controversial marina on Waiheke Island has released a video showing more of a clash between protesters and security guards. 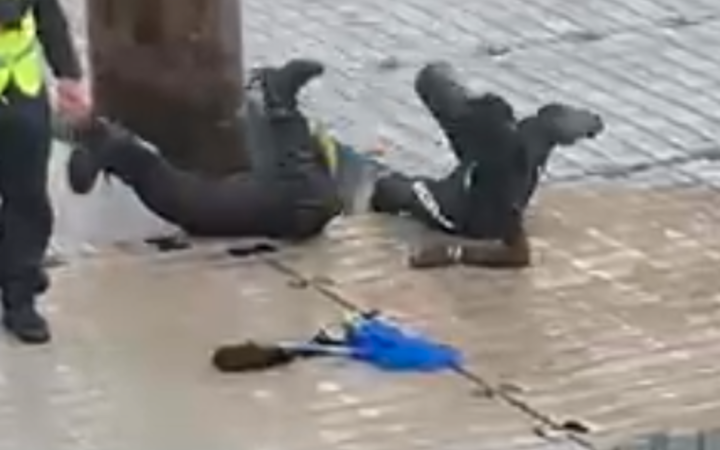 Protect Pūtiki has been occupying the Kennedy Point Marina site for more than 120 days, claiming the development endangers a nearby kororā (little blue penguin) colony. The developer rejects the claims.

Clashes between protesters and security guards have triggered police investigations, looking into allegations from both sides.

In a video posted to Facebook last Wednesday,a protester on a pontoon is manhandled into the water by a man wearing a high-vis jacket who then takes a step and appears to kick the person in the water in the head. The same incident is seen in new video released by the developer.

Director Kitt Littlejohn said the company did not condone the use of unreasonable force or unprovoked violence but believed that it was important to put the incident into its wider context.

"What immediately preceded this widely viewed altercation was a disturbing incident in which one of the protesters repeatedly kicked a 55-year-old security guard in the head as he lay on the pontoon, having been shoved there after trying to prevent access onto the pontoon.

"He was subsequently pushed into the water by the protester and into a narrow cavity where he sustained a head injury and could have drowned."

Littlejohn said the security and construction team were trying to stop protesters trespassing into a clearly marked, active construction zone.

The company remained committed to conducting an internal review of the events and is assisting the police with their enquiries, he said.

Protesters last week said force used by security guards on behalf of the developers had been scary.

An earlier incident - also recorded on video - involved workers who were seen ramming a boat into protesters who were sandwiched between large black buoys surrounding the construction zone.

Protect Pūtiki occupation spokesperson Emily Weiss said last week "We are only holding the frontline in response to the lack of intervention and the lack of upholding of Te Tiriti that our Crown is currently doing," Weiss said.

"That means we are putting our safety and wellbeing at risk, but we have to because until Auckland Council, the Crown and our government step in and show an understanding that this is an injustice ... we have no choice but to be here enacting our kaitiakitanga."