A Ngāruawāhia hapū has been left in the dark as to why they were not properly consulted about a decision to destroy 300-year-old rua (food pits), it says. 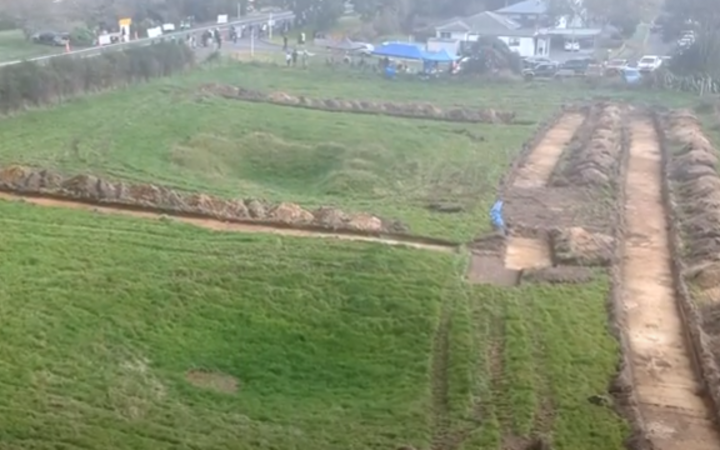 The seven rua on Great South Road were part of over 140 burrow pits that used to make up the extensive gardens of Pukeiāhua Pā, the home of the hapū Ngāti Tamainupō.

"[It] is to do with the chief Ngahere starting, or beginning a feast between the two powerful tribes, Waikato and Ngāti Maniapoto - with the words 'Wahia ngā rua', break open the food pits, and the name Ngāruawāhia comes from that saying."

Despite the cultural significance of the rua to the hapū, an archaeological authority was granted by Heritage New Zealand Pouhere Taonga to allow property development company Perjuli Developments Ltd (Perry Group) to destroy the rua.

Excavations began on 6 May, but Perry Group has since stopped the earthworks after hapū and community members turned up in protest.

Huirama said the hapū were never given the right to appeal the decision to allow the rua to be destroyed, as her name, her email address, and the name of the trust she worked for were all wrong on the developer's application to Heritage New Zealand.

She could not understand how the application was approved with incorrect information, especially as she had last minute talks with Perry Group.

"We met on site three times with the developers leading up to lockdown, so it baffles the mind how the archaeological authority could be approved one day before lockdown, and we not be listed as a mana whenua group on that legal document."

In a statement, Heritage New Zealand Pouhere Taonga said it had stressed to the developer the importance of preserving the pits, but Perry Group had argued the pits were in nothing like their original state.

"On balance the decision was made that they could be destroyed for the recovery of the archaeological information that they hold and to allow the landowner to use their land for a housing subdivision."

It said it was not provided with any information from the applicant to say that iwi/hapū did not support the development.

Huirama wanted an apology and an explanation as to how the process has failed to ensure the historic rua are left intact.

She invited Heritage New Zealand, Waikato District Council, Perry Group and local Māori MP Nanaia Mahuta to a hui on Friday, where she will deliver a petition of 3000 signatures calling for the rua to be protected.

Mahuta said it was clear the consenting process had fallen short for the hapū.

"We're at a point now where Tamainupō are clearly expressing their desire to ensure that some of the pits are protected because it relates to what is unique in terms of the name of Ngāruawāhia."

Huirama said instead of the planned housing subdivision, the hapū wanted the land protected and made a public reserve.

Waikato District Council chief executive Gavin Ion said a protest held last Friday made it clear there was a lot of community support for the protection of the site.

He would not be drawn on whether the council was open to purchasing the land from the developer to make it into a reserve.