Princess Cruises Australia has issued a public apology after crew members dressed-up in traditional Māori clothing and performed a pōwhiri for tourists on the Tauranga Port this morning. 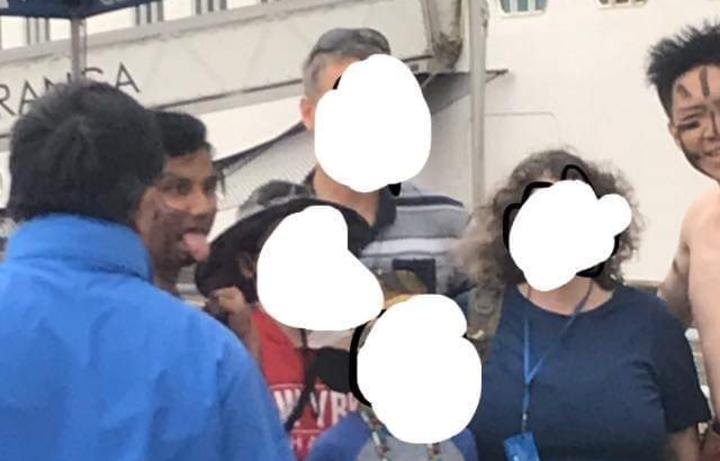 Images posted to social media show crew members performing with fake moko painted on their faces and posing for photographs.

Local iwi Ngāi Te Rangi and Tourism Bay of Plenty have since released a joint statement, saying they were saddened and offended by the incident, and hoped to work with the company to ensure it didn't happen again.

In a statement, Princess Cruises said after being made aware of the situation, it took immediate steps to withdraw the crew members from the area to prevent further possibility of cultural insensitivity.

Princess Cruises say no offence was ever intended, and apologises unreservedly for what has happened.

Ngāi Te Rangi chief executive Paora Stanley said such actions turned Māori culture into a "pantomime" - something that was despicable.

But he was willing to working with cruise companies to make sure pōwhiri were performed properly.

"Should we just keep on bashing people into submission or should we try to figure out a way to prevent this from happening again? Because it actually happens too often.

Treaty Grounds cultural advisor Mori Rapana was shocked and disturbed when he saw photos of the fake pōwhiri. It was offensive, he said.

Tourist companies must engage with local mana whenua if they wish to do a pōwhiri, he said.

Tourism Bay of Plenty was worried cruise ship companies may be performing fake pōwhiri at other ports.

Chief executive Kristin Dunn said she was outraged when she saw the photos online.

She said she would be advocating that all cruise ship companies have an on-the-ground regional contact point to ensure all pōwhiri are conducted by mana whenua.

She would also be raising the issue with Cruise New Zealand Association and Tourism New Zealand to see if similar actions were happening at other ports, and how to make sure they were stopped.