The government has come under harsh criticism at a hui in Hamilton called to help plan the terms of reference for a Māori independent inquiry into Oranga Tamariki. 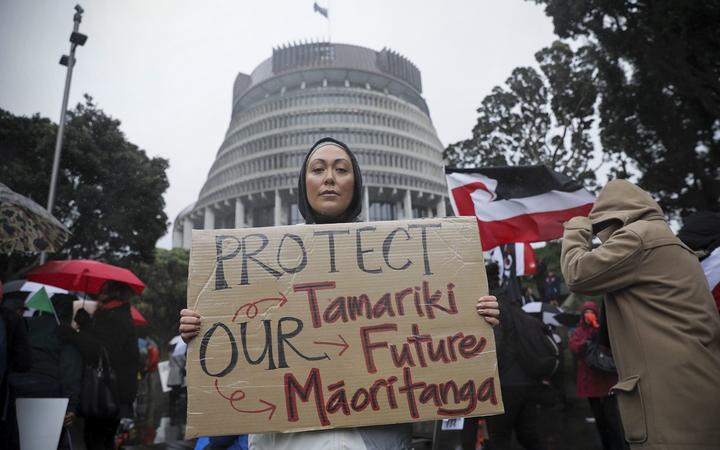 A protester at Parliament on 30 July. Photo: Ana Tovey / RNZ

The hui, the second in a few weeks, is the result of what the Whānau Ora Commissioning Agency says is continued inaction to Oranga Tamariki's practices around taking Māori children into care.

The chairperson of Whānau Ora Commissioning Agency, Merepeka Raukawa-Tait, said all was not well with whānau and they had been sharing stories with her about more than the uplifting of their tamariki.

"They have been talking to me about the housing they have that does not suit their needs," Ms Raukawa-Tait said.

"They have been talking to me about the little or no income that they are trying to exist on.

Māori were expecting Māori leadership to do something about it, including Māori politicians, she said.

"We expect them to advocate for their people as well. Absolutely important. It's not much good having 13 members of parliament and you don't hear a bloody word.

The outgoing chief executive of the Whānau Ora Commissioning Agency, John Tamihere, said the time when Māori were treated as second-class citizens had to stop.

"This is an independent inquiry, run for our people by our people to our people," Mr Tamihere said.

He took a shot directly at the government.

"The minister for Whānau Ora says to me, we will not fund Whānau Ora if you continue to attack the government. Running an inquiry is our mandate and our right.

"This is a government that is totalitarian when you start and if you put your hand up, cut the funding," he said.

In a statement, Whānau Ora minister Peeni Henare said that was completely false.

"We are focused on the future direction of Whānau Ora, and I am still hoping Whānau Ora stakeholders will come together to seriously discuss how we can best work together to expand this important kaupapa for the benefit of whānau," Mr Henare said. 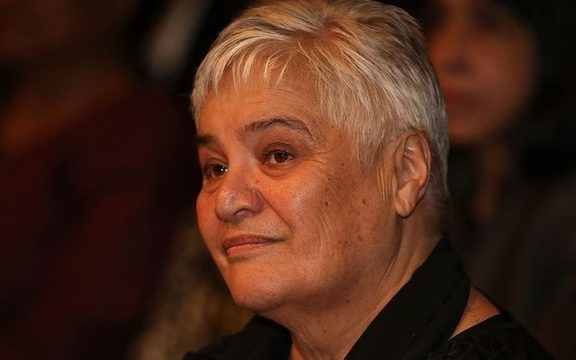 A former Whānau Ora minister, Dame Tariana Turia, is a member of the governance group overseeing the Whānau Ora-led inquiry.

She said she was sick to death of what was happening to Māori.

"Oranga Tamariki is only one aspect, a dreadful aspect, but it is only one aspect and when you look at all the systems of the state and how they collaborate with one another to ensure that we never get anywhere, that is what we are up against.

"We are actually up against the system that denies our rightful place as Tangata Whenua in our own land."

Dame Tariana said the time had come for Māori to stand up to what she said was outrageous behaviour by the state.

"We have to put ourselves on the front line actually to make the change that we know needs to happen," she said.

"(If) we keep allowing them to behave in the way they do, we are going to watch successive generations of our mokopuna go down the tubes and I am not prepared to do that.

"We have to act as if every day is our last day and we are here to protect the interests of our whānau and hapū," she said.

"Te Puni Kōkiri have got some amazing people working there and there's no doubt about that, but it is a Crown agency and it will be dictated to by the state," she said.

"I'm not telling you to rise up but I think we have to stop lying down and allowing others to trample all over us. The state only acts in the interest of the state.

'This is not a new issue that is confronting us'

A distinguished group of kaumātua and kuia make up the governance group overseeing the inquiry.

Dame Naida Glavish said everyone is committed to change, but warned it won't come easily.

Sir Mark Solomon perversely congratulated Oranga Tamariki for its actions when it uplifted a child from its mother in Hawke's Bay Hospital earlier this year.

He said that finally galvanised Māori to do something.

Sir Mark said there are a number of women running refuges that have been forced to take drastic action.

"Some of those women are literally hiding children from Oranga Tamariki because of the nonsense that happens from within that system."

The Human Rights Commission and the Office of the Children's Commissioner support the independent inquiry being run by the Whānau Ora Commissioning Agency.

Children's Commissioner Judge Andrew Becroft told the hui that the heart of the issue is a misunderstanding or ignorance in the community about the place of a child in Māori society and its relationship with whānau, hapū and iwi structures.

"The new legislation actually measures and comments on whānau, hapū and iwi 32-times. It is a prescription for a revolution and we don't often get the chance for that."

"In my life time this will be our last chance to get it right an unprecedented opportunity, virtually revolution by devolution."

And Ms Raukawa-Tait said there is disquiet throughout the country from Māori in their dealings with Oranga Tamariki.

She says the work of Māori Whānau Ora providers can not be underestimated.

"Our families have high and complex needs, so we want to make sure that they live to their potential, they have every right to live upright and we must never leave out any members of our family behind."

"There must not be a A-team and a B-team in this country because we know who will be relegated to the B-team," she said.

The independent inquiry's terms of reference will be presented to Kingii Tuheitia and the Kingitanga at Turangawaewae Marae on Tuesday.