Prime Minister Jacinda Ardern is under fire for going overseas while one of the biggest Māori land disputes in decades continues. 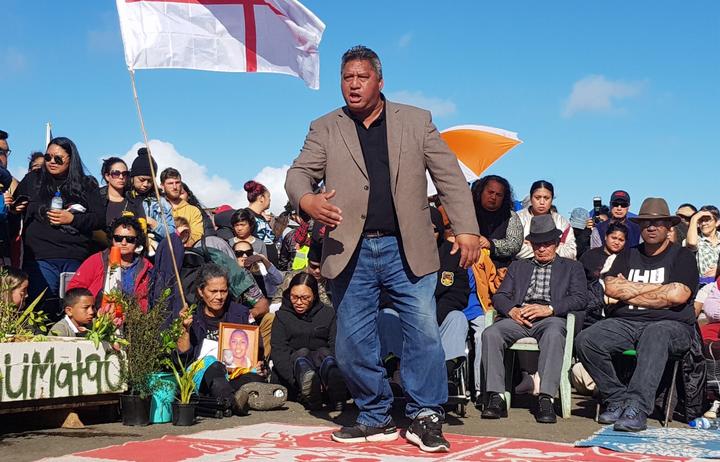 Today marks a week since protesting ramped up at Ihumātao in South Auckland and those gathered there said they were disappointed Ms Ardern had not turned up.

As the prime minister continued her visit of the Tokelau Islands, a Cook Islands paramount chief brought the sun from the Islands to Ihumātao - arriving at the site where hundreds are trying to stop a major housing development.

Pa Upokotini Ariki of Takitumu Vaka, with a lush flower crown, said it was important she turned up.

"This is our people here - I come on my own capacity as Ariki to be here and to bring aroha and peaceful message to the whānau here," she said.

Pa Ariki said she felt sorry for the people at Ihumātao who were fighting for their land.

She said her own people were starting to encounter challenges with their traditional land, and the visit could be quite helpful. 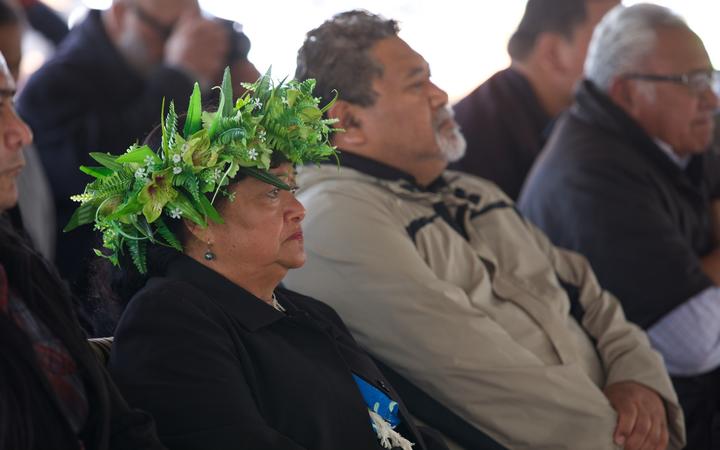 Makaurau Marae representative Erueti Rakena said in te reo Māori that it was an honour to have her, and the visit boosted their spirits.

It was this time last week that police came to evict members of SOUL - Save our Unique Landscape - who had been occupying the land for years to stop Fletcher Residential from building 480 houses there.

The past week has seen the numbers of supporters climb to 5000 at the weekend and drop back down to a few hundred.

On Friday, as she prepared to leave for her six day trip to the Tokelau Islands, Ms Ardern put a hold on development until a resolution is found.

But this morning in Parliament, Simon Bridges, who hasn't yet visited the site himself, took a swipe at her for leaving the country.

"When you have got the first Māori land occupations we've seen in a very long time, it beggars belief that the prime minister right now is in Tokelau," he told reporters.

"We have just had a three week recess, we have Parliament on."

SOUL would not be interviewed today, but Mr Rakena said that they were sad that Ms Ardern had not visited them.

Ms Ardern is expected back on Thursday, and Kelvin Davis is acting Prime Minister.

He arrived in Auckland this afternoon and plans to meet with stakeholders in the Ihumātao dispute over the coming days.

The protesters are adamant they want written confirmation that no building will take place until a resolution is found.

However, Labour MP Willie Jackson said that was unlikely to happen.

"They're going to have to just trust us, aren't they?" Mr Jackson said.

"The pressure is on the Māori caucus, we are working with other ministers to find a resolution and we are hoping to have some progress by the end of the week."

Labour's Tāmaki Makaurau MP Peeni Henare said he did not know why the protesters went to the media about written confirmation.

The numbers on site have been dwindling since the weekend, with a few hundred there yesterday, but the atmosphere remains jovial and calm.