Police are reducing their presence at Ihumātao, but officers will remain there for safety reasons because of the size of the protests there. 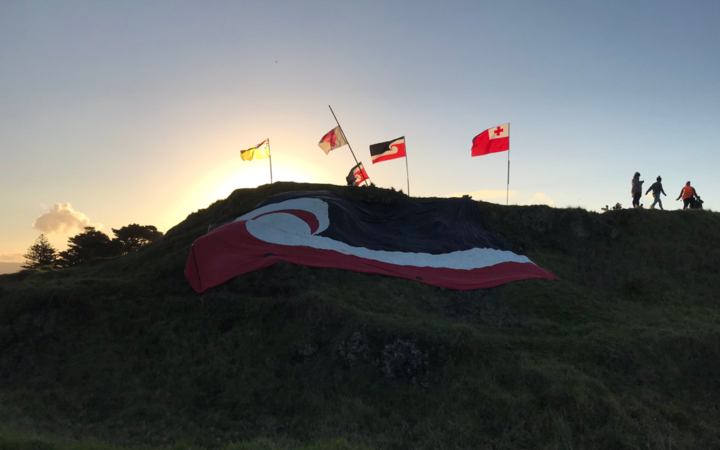 The tino rangatiratanga flag is seen at Ihumātao as the day draws to an end for protesters on the land on Friday, 26 July. Photo: RNZ

The fight to protect the 32ha land block in South Auckland from a new housing development drew several thousand protesters over the weekend, after an eviction notice was served on 23 July to some of those who had been occupying the land in peaceful protest.

Te Kawerau ā Maki - the iwi considered mana whenua at Ihumātao - remains divided on the issue, with its mandated iwi group known as Te Kawerau Iwi Tribal Authority supporting the development along with a deal with Fletcher Building to have 8ha of land returned to them.

In a statement at 4.30pm, police announced their presence at the site was being reduced today, noting the "relaxed atmosphere and peaceful behaviour of protesters".

"The number of police officers at the protest site has been reduced today following assessment of the current situation and discussion with protest organisers," the statement said.

"Police will however remain at the site to keep the peace and for safety reasons, given the current size of the protest action."

They also said that organisers had agreed there would be no attempt to enter the area around buildings where the eviction notices were served.

After previously saying the government would not intervene, Prime Minister Jacinda Ardern vowed on Friday that no building would take place at Ihumātao while a solution was being sought.

Qiane Matata-Sipu, a mana whenua representative from the Save Our Unique Landscape (SOUL) group said whānau voted at a meeting last night to remain on the whenua until the prime minister sent them a letter confirming the promise she made last week - that there would be no construction for a planned housing development until the dispute is resolved.

"We are waiting for this letter, this confirmation in writing. We are still deciding to hold the whenua, we are still here, we are still inviting people to come and stand with us. Tautoko, stand in solidarity, be active kaitiaki here on our whenua."

Ms Matata-Sipu said there were hui at the marae every night to discuss how they will move forward.

The number of occupants on site has dropped to fewer than 1000 after peaking over the weekend. However, about 80 tents are still there, including a number of families camping.

With the government now willing to find a solution to the week-long stand off at Ihumātao, those continuing to occupy the land - like Lisa Tahere - are hopeful their ancestral whenua will be saved.

"We just want the whenua left to us and our children, we want to be able to look them square in the eyes and say we did everything we could to hold a place for them," she said.

Mr Peters said the authority's mandate had been recognised long before the protests began.

"It will always in Māoridom come down to this - who's been keeping that land warm over the centuries, all the way to 2019.

"That in the end will be what guides the system in this country and indeed Māori understanding, not the view of a whole lot of outsiders."

Mr Peters said the protesters' demands for a written confirmation of her statement ruling out building at the site was in bad faith.

"I believe such a statement is a statement of bad faith where the Prime Minister's concerned. She gave her word and she's entitled to be believed."

Labour MP for Tamaki Makaurau Peeni Henare said he was surprised protesters at Ihumātao had requested a written confirmation from the government that they will be included in talks to resolve the land dispute.

He said the door had always been open, and was confused as to why the request was not made when he visited the site on Saturday.

"I'm rather disappointed that having been here on Saturday, that's not what they requested from myself and minister Jackson. And now to come out and declare that to open media without even coming to us is a bit disingenuous."

Protesters who have committed to stay at Ihumatao for the long-haul are filling their days with waiata, karakia and whakawhanaungatanga.

Just how long they will have to wait for a resolution is yet to be seen.

SOUL spokesperson Pania Newton, told a media stand up they were also asking for the police and contractors to leave the land.

"We are asking them to leave the land so that we are able to re-enter the whenua and exercise our kaitiakitanga and guardianship over the land."

Another representative, Haki Wilson, made a formal invitation to the Prime Minister.

"This is an invitation to our Prime minister to come to the land to experience what we are experiencing and to talk to her people and engage with those here."

The Prime Minister is out of the country in Tokelau for the next three days.

Meanwhile, a complaint with police will be laid over the Prime Minister's "interference" in the Ihumātao dispute. David Rankin, who describes himself as a senior member of Te Kawerau a Maki, said he would lodge a complaint with police that the Prime Minister used her position to interfere in a legal transaction and as a consequence would deprive the iwi of dozens of homes which Fletchers had contracted to provide to the mana whenua.