More than 3000 people have gathered to passively protest a housing development at Ihumātao. 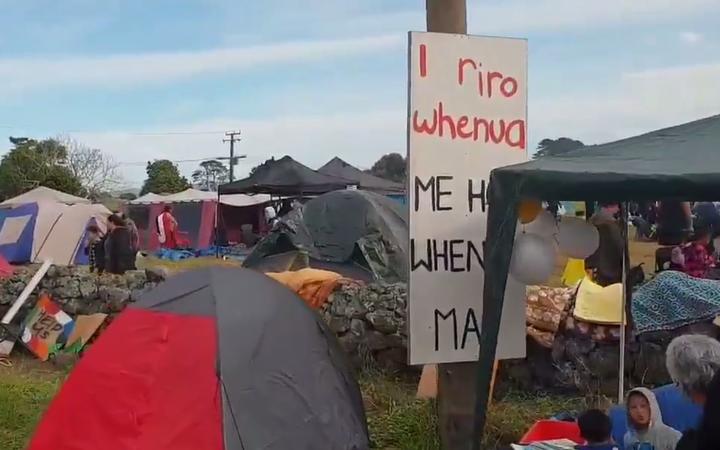 The campers are preparing for a day of waiata and karakia as the sixth day of the occupation of Ihumātao gets underway. Photo: RNZ

There were waiata and karakia this morning, as the occupation entered its sixth day.

A sermon is underway, after mana whenua welcomed religious groups to come and pray for the land. The mood continues to remain peaceful and relaxed.

Members of the Muslim community are expected to arrive later this afternoon to tautoko, or support, the cause.

Meanwhile, tamariki are getting their facepainted, a morning yoga session is underway, and whānau groups are warming up around fire pits.

Rā ono at Ihumātao. Another morning of passive resistance here with face painting and friendly faces on arrival. Religious groups are being invited to come and karakia over the whenua today @TeManuKorihi pic.twitter.com/zVWBNglHoo

As darkness fell and a bitter chill set in last night, thousands stayed.

Cannot put into words how peaceful and calm the mauri at Ihumātao is right now. This video may give you an idea. pic.twitter.com/v0sCLxZeYY

At the frontline, just metres away from the police line, Stan Walker, soul singer Teeks and roots artist Troy Kingi sang to the crowd, many clutching blankets.

Each singer took a moment to talk about their support for the protests. Stan Walker said he was grateful to be at the site where people have fought tirelessly to defend their land.

Fires were lit, and in dozens of marquees kaimahi (workers) were handing out kai, hot drinks and blankets - all for free, or a koha donation. 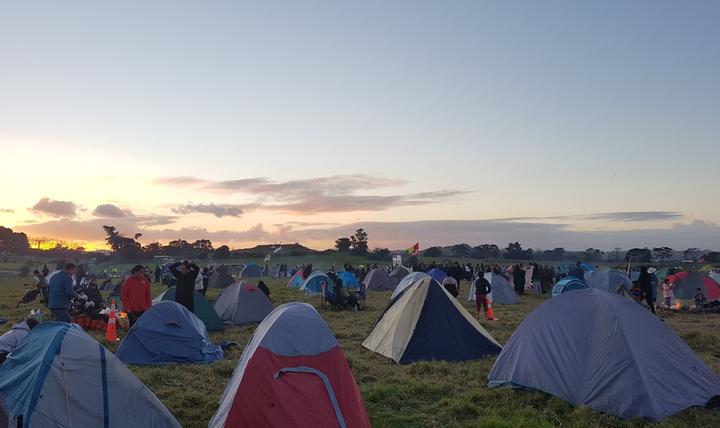 Around 100 tents have been set up at the site and occupants are being supported with hot drinks and kai. Photo: RNZ / Jordan Bond

Children were dancing and singing, and others playing guitar, before the main event.

* Read more: Why Ihumātao is being occupied by 'protectors'

Some see this as part of a growing global fight for recognition and protection of indigenous land rights.

One man, Eddy, has been camping out since Tuesday after coming down from Mitimiti in Northland. He says Ihumātao is part of a renewed and energetic movement for global indigenous land rights.

Eddy said he would stay as long as it takes if he didn't have to go back to work, mentioning the 18 months people occupied Bastion Point. "We've only done five days!"

He said many Māori feel aggrieved about confiscated land around the country, and added that even if the prime minister managed to buy or gift the Auckland site back to tangata whenua, it may well set in motion a series of other claims.

"Everybody else around the motu is going to be wanting their land back the same way. I think that it's unfair [if] she does that, so I don't know who to point the finger at. I just want them to just try and resolve the issue with Fletcher, with the council, and with the mana whenua of this land to all come to an agreement of something where everyone's happy - [but] it's probably not gonna happen." 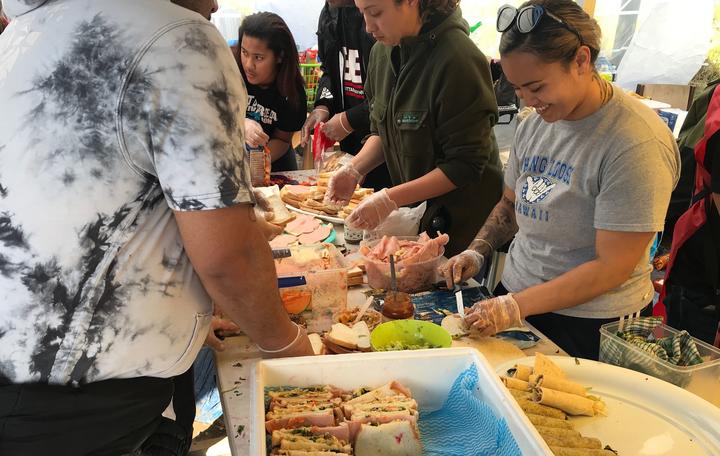 Dozens of volunteers are ensuring there is enough kai for everyone on site. Photo: RNZ

The police yesterday praised the behaviour of protesters, saying it's been a relaxed atmosphere. They noted that there hasn't been an arrest since Wednesday, and that people seem to be committed to their actions being peaceful.

Another land protector, Zane Wedding, who's also been camping since Tuesday, said tensions were starting to rise before the prime minister put a halt on any construction work. Since then he said the tone has changed.

"This was changing into something bigger than the mana whenua argument. With all the other things going on around the world - Mauna Kea [in Hawaii], Standing Rock [in North Dakota] - this was becoming a real symbol of indigenous versus big companies."

He's amazed at how much the movement has grown in just a few days.

"That's the biggest thing for me - the way that New Zealand can just boom - get to a place and show in force that people power is still a thing, it still exists."